Monster (NYSE: MWW), a global leader in connecting people to jobs, and Brandwatch, the leading social intelligence company, today announced the results of their second annual Monster and Brandwatch Job Report, a social media study of job sentiment and corresponding interactive infographic on the insights. Revealing where people love and hate their jobs the most in the U.S., the study also analyzed exactly who, what, when, where and why people take to Twitter to discuss how they feel about their jobs, and how those findings differ from the 2015  report.

“Perception of professional happiness is continuously evolving, influenced by a variety of external and personal factors. These range from uncertainty driven by volatile financial markets and the US presidential election, to work environment and employee benefits,” said Matt Anchin, Senior Vice President, Global Communications and Content at Monster. “The latest data shows some drastic changes compared to last year’s report, indicating that people are potentially approaching their work lives differently. Additionally, whether you are a job seeker looking for a new opportunity with high happiness potential or are an employer trying to increase employee satisfaction, it seems that the adage ‘location, location, location’ may just be the most important thing to  consider.”

Where do the lovers and haters  live?

The most significant insight of the 2016 study is that overall US state population is now a key indicator of job satisfaction. In seven out of the 20 least-populous US states, as ranked by the US Census Bureau, people are tweeting about loving their job at a higher ratio to hating their  job:

At the same time, the top 10 states in which people on Twitter hate their job at a higher ratio than loving their job are consistent with last year’s results. All are exclusively in the Eastern half of the US, and eight of last year’s 10 lowest-ranked states made a showing again this year. Furthermore, three of the 10 most populous states in the country according to the US Census Bureau – Michigan, Ohio and Florida – appear on this list, suggesting that population size significantly impacts job hate in addition to job  love:

When are people loving and  hating?

While July remains the most hated month of the year, October is now the most loved month, a change from last year’s top month for job love,  November.

There has also been a shift in the days of the week that U.S. workers tweet most positively about work, with Thursday overtaking Friday as the day with the highest job love-to-hate  ratio.

“With the ever increasing popularity of social media platforms, it’s becoming more and more common for people to publicly share their opinions about anything and everything – both personal and professional – at incredible scale. A collection of social media mentions is an extremely interesting dataset, because it gives you a rare opportunity to evaluate an audience’s natural and unfiltered opinions on a topic,” said Amy Barker, Head of Analytics at Brandwatch. “This study revealed that workplace social dynamics appear to also now play a greater role in job sentiment. Workers tended to refer to ‘people’ in conversations where both job love and job hate is expressed. This suggests that it’s not always about the work, the pay, or the office, but about who you spend every day  with.”

About Monster  Worldwide
Monster Worldwide, Inc. (NYSE: MWW) is a global leader in connecting people to jobs, wherever they are. For more than 20 years, Monster has helped people improve their lives with better jobs, and employers find the best talent. Today, the company offers services in more than 40 countries, providing some of the broadest, most sophisticated job seeking, career management, recruitment and talent management capabilities. Monster continues its pioneering work of transforming the recruiting industry with advanced technology using intelligent digital, social and mobile solutions, including our flagship website monster.com® and a vast array of products and services. For more information visit  www.monster.com/about.

The Brandwatch Analytics platform gathers millions of online conversations every day and provides users with the tools to analyze them, empowering the world’s most admired brands and agencies to make insightful, data-driven business decisions. Vizia distributes visually-engaging insights to the physical places where the action  happens.

The Brandwatch platform is used by over 1,200 brands and agencies, including Cisco, Whirlpool, British Airways, Walmart, and Dell. Brandwatch continues on its impressive business trajectory, recently named a global leader in enterprise social listening platforms by the latest reports from several independent research firms. Increasing its worldwide presence, the company has offices around the world including Brighton, New York, San Francisco, Berlin and  Singapore. 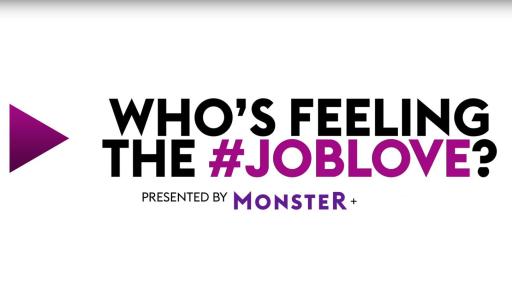 Chat with the experts 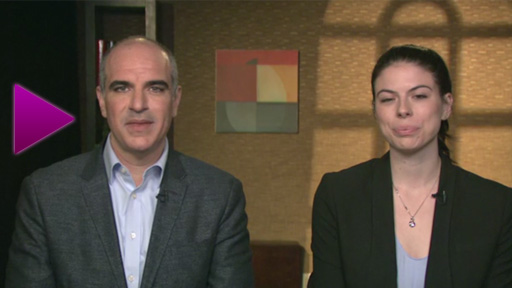 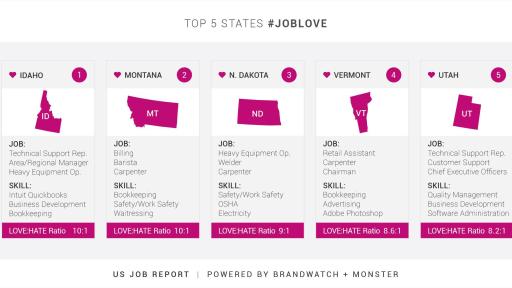 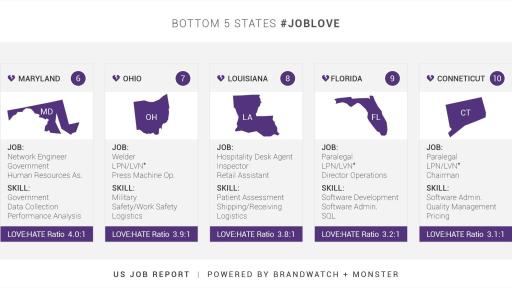