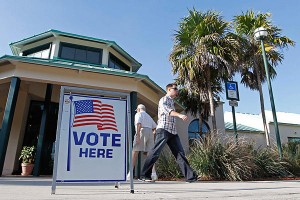 By adding an average of 803 new residents each day between July 1, 2013 and July 1, 2014, Florida (largely considered “Red” or “Purple” in voting behavior) passed New York (a “Blue” state) to become the nation’s third most populous state, according to U.S. Census Bureau state population estimates released today. Florida’s population grew by 293,000 over this period, reaching 19.9 million. The population of New York increased by 51,000 to 19.7 million.

California remained the nation’s most populous state in 2014, with 38.8 million residents, followed by Texas, at 27.0 million. Although the list of the 10 most populous states overall was unchanged, two other states did change positions, as North Carolina moved pastMichigan to take the ninth spot.

Another milestone took place in Georgia (ranked 8th), which saw its population surpass 10 million for the first time.

In addition to the 50 states and the District of Columbia, the new statistics also include estimates for Puerto Rico. On July 1, 2014,Puerto Rico had an estimated population of 3.5 million, a decline of 47,000, or 1.3 percent, from one year earlier.

The Census Bureau produces population estimates each year, allowing the public to gauge the growth and demographic composition of the nation, states and communities. These statistics use administrative data to estimate population change between census years, using the decennial census count as a starting point. Local governments use estimates to locate services, and estimates are used by the private sector to locate businesses.

During 2015, the Census Bureau will release estimates of the 2014 population of counties, cities and towns, and metropolitan and micropolitan statistical areas as well as national, state and county population estimates by age, sex, race and Hispanic origin.