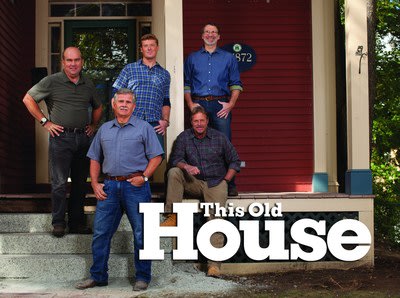 As the first home improvement reality series in the history of television, THIS OLD HOUSE began its broadcast in 1979 featuring expert home renovation for national audiences. Thirty-five years later, its beloved cast of experts’ hosts a historical homecoming to the Boston area, showcasing classic deep-dive how-to renovation projects in celebration of the shows longstanding commitment to teaching first class, authentic craftsmanship. The cast includes general contractor Tom Silva, master carpenter Norm Abram, plumbing and heating expert Richard Trethewey, landscape contractor Roger Cook, and host Kevin O’Connor.
The 35th anniversary season of THIS OLD HOUSE features the renovation of an 1850 Greek Revival Rowhouse in Charlestown, MA and a 1966 Colonial Revival in Lexington, MA – the youngest renovation project in THIS OLD HOUSE® history – while following a new build for a wounded Iraqi War Veteran with Homes For Our Troops in Hopkinton, NH. The Emmy® Award-winning home improvement series premieres the new episodes this October 2, 2014 on PBS (check local listings).“Since its premiere in 1979, THIS OLD HOUSE has never strayed from its mission of demystifying home improvement while showcasing quality craftsmanship and new technology,” says Master Carpenter, Norm Abram. “This focus has kept us on the air and in the homes of our fans for 35 years.”

– Charlestown, MA – #TOHCharlestown
Located in Charlestown, MA – Boston’s oldest neighborhood – the opening project for the 35th season features the renovation of an 1850 Greek Revival Rowhouse. Just down the hill from the USS Constitution and the Bunker Hill Monument, the modest red brick rowhouse needs extensive masonry and structural reinforcement. An enlarged dormer out front and a small bump out in the back will make room for new living spaces that will preserve the old-house feel while adding amenities for modern living. Crumbling retaining walls, a 1980s kitchen, a broken down and leaking master shower, inefficient windows, and old heating system and failing roof will all be upgraded as part of this eight-episode story arc.

Featuring 26 brand-new episodes (Charlestown, MA, 8 episodes, Lexington, MA, 15 episodes and Home For Our Troops, 3 episodes), the 35th anniversary season of THIS OLD HOUSE will premiere nationally on PBS on October 2, 2014 (check www.thisoldhouse.com/tvschedule or your local listings).

Leading up to the premiere, visitors to www.thisoldhouse.com can access exclusive behind-the-scenes special features, such as a photo gallery, project overview, and products and services information on www.thisoldhouse.com. Viewers can become fans of THIS OLD HOUSE on Facebookor follow the show on Twitter and can continue the conversation about these projects using #TOHTV on Twitter.