A short break abroad is the perfect way to indulge in inspiring museums, exciting new foods and experience different cultures. Choosing one of Europe’s most fascinating cities, such as Istanbul or Berlin, can leave the soul refreshed and ready to face the world again. With this in mind luxury holidays specialist Cox & Kings brings you five of the best European cities for the perfect short breakaway.

From the Second World War, to the division of East and West Berlin city and the 1989 fall of the Berlin Wall, Berlin has played a central part in modern European history. The city has developed into a hugely influential and vibrant city offering exciting nightlife, superb restaurants and fascinating museums. The elegant tree-lined boulevard of Unter den Linden is one of the grandest streets in the Europe. Key sites to visit include the old Jewish quarter, the area around Hackescher Markt station which dates back to the 19th century[1], Brandenburg Gate, the old city’s entrance and the Reichstag, the historic parliament building transformed by Lord Norman Foster. There are a multitude of bohemian cafes, contemporary bars and galleries that will captivate and keep you coming back for more.

Founded by Peter the Great, St Petersburg is widely known as the window to the west[2]. Neoclassical and Baroque influenced buildings interweave Russia’s second largest city dubbed the “Venice of the North” for its palace-lined waterways. St Petersburg escaped the architectural incursions of Stalinism, and its grandiose relics of the tsarist days are still enjoyed today. The waterside walkways and elegant streetscapes are best seen on foot. With more than three million works displayed, the State Hermitage museum is one of the world’s largest museums[3] and highly recommended when visiting this imperial metropolis. Boasting an intriguing collection that ranges from oriental art, Russian culture and western European art, it’s a culture vulture’s paradise[4].

Istanbul has enjoyed more than four centuries of imperial patronage, creating one of the most famous skylines in the world. From the Bosphorus strait that divides Asia and Europe, to the mosques and western influenced buildings, the city is the meeting point where east meets west. Smells of shisha and apple tea fill the air, alongside the smell of mouth-watering chargrilled kebabs. Highlights include the magnificent Blue Mosque built during the reign of Ahmed I, the Ottoman sultans’ Topkapi Palace and the former Orthodox basilica Hagia Sophia. After a day of sightseeing visit one of the city’s famous hammans for an authentic Turkish spa experience. Shopping is abundant at the Grand Bazaar with its maze of vivacious shops, practice your bartering skills and stock up on unusual spices at the nearby Spice Bazaar.

Italy is one of Europe’s most beautiful countries and Venice is at the heart of its seduction. When Napoleon conquered this enchanting city, he looked at the Piazza San Marco and called it the “drawing room of Europe”[5]. Whether exploring on foot or by boat, this romantic city is an inspiration with its grand palazzos, piazzas, magnificent courtyards and marbled churches. More than 800 years old Basilica di San Marco church is a Byzantine dream with its façade and interior features[6]. A voyage on a gondolier in the canal is the perfect way to soak up Venice and immerse yourself in this romantic city. 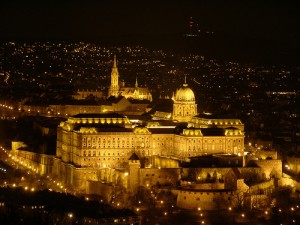 Buda Castle is a must see destination.

Hungary’s capital is a city filled with cosmopolitan cafes, fashionable restaurants, upmarket boutiques and soothing spas. The Buda Castle quarter, a Unesco world heritage site, dates back more than 700 years and is a must-see on any visit[7]. Sitting on the western side of the Danube river, the castle was once the residency of Hungarian royalty. Buda is home to the Banks of the Danube and Andrássy Avenue, the iconic Budapest boulevard that boasts a range of luxury boutiques. In addition, the area of Pest is filled with Art Nouveau buildings including the stunning Central Market Hall.

Cox & Kings, the luxury short breaks specialist, was established in 1758 and is built upon high quality service and attention to detail. The company continues to flourish as an independent tour operator, with operations in London, the US, Japan, Australia and throughout India. Cox & Kings organizes private tailor-made holidays to India, Latin America, the Middle East, the Far East, Africa, Europe, Australia, New Zealand and the South Pacific and the Caribbean.