Despite a high frequency of self-reported distracted driving habits (84% of new car buyers reported one or more experiences in the average month), the adoption of safety technologies is of greatest interest among American new car buyers. Safety technologies like  back-up cameras, blind spot warning systems, and pedestrian sensors gained the most consumer interest over the past year compared to technologies focused on entertainment and comfort such as satellite radio and voice-activated controls. This is according to the 2012 Harris Poll AutoTECHCAST(SM) study released by Harris Interactive. 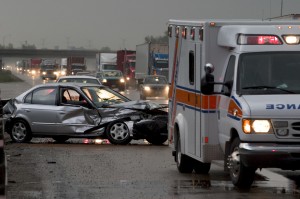 Thankfully, those that more frequently engage in distracted driving habits are more likely to consider safety and intelligent sensing technologies than others.

“While ideally these drivers should practice fewer of these distracted driving habits,” stated Mike Chadsey, Vice President, Automotive Solutions Consultant, Harris Interactive, “it is also comforting to know that this distracted driving group is aware of the importance of safety features and is actively considering them for their next vehicle purchase.”

“Plug In” Technology Options Win Out Over More Integrated Technology
As car manufactures anticipate what automobile technology consumers will desire most, many original equipment manufacturers are pondering whether they should enable docking and connecting for current technology, create their own technology features, or partner with technology firms to meet today’s changing consumer demands. When evaluating consumer interest in automobile connectivity options, including built-in applications and options for docking smart phones, the study concluded that flexibility to “plug in” current consumer electronics wins out over integration.

“Consumers are indicating that they want their automotive technology to help improve safety while giving them more flexibility, even if it costs a little more,” added Chadsey. “Personalization is the future of the connected car. Drivers want to use technology they already know and love in their vehicles. By integrating technologies they already own, it also eliminates some of the technology usage issues plaguing the industry today.”