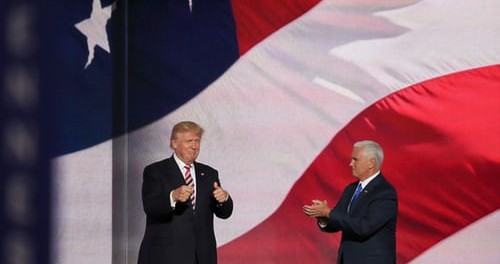 There have been three distinct points where everything seemed to be about to come unglued for Donald Trump since he decided he was going to stand to be President of the United States of America. The first was before the election even took place, when a recording emerged of him making incredibly distasteful comments about his conduct with women during an offhand conversation with Billy Bush in the back of a bus. Any normal candidate’s campaign would have been over instantly. As it transpired, Trump was no normal candidate. He went on to win the election.

The second was the Mueller investigation into whether or not Trump had obstructed justice, conspired with Russia’s interference in the election process, or both. Several prominent Democrats and political commentators were particularly confident about the outcome of the painstakingly slow inquiry process. They hoped that the studious arbitrator would provide them with a magic bullet to take Trump down. Again, they were wide off the mark. Mueller concluded that Trump had tried to obstruct justice, but failed. He recorded the equivalent of an open verdict on the other matters. Trump claimed exoneration. The report didn’t provide that, but nor did it provide a means to remove him.

The third point is the one we’re at right now – the ongoing impeachment inquiry that’s taking place within the House of Representatives. Of all the places the President was likely to run into trouble, this was the most unexpected. What on the surface appears to have been a routine phone call with the President of Ukraine has blown up and turned into a scandal that could yet sink Trump before he gets the chance to run for a second term – but will it really get that far? Do the Democrats have the numbers to get a formal impeachment all the way through the Senate?

Why This Is Happening

Trump’s brand of politics is more abrasive and aggressive than any we’ve seen in living memory in the USA. He doesn’t so much debate with his opponents as aggressively pursue him. The man who history is likely to record as ‘the Twitter President’ singles out his rivals on social media and throws anything he can find at them as a weapon. When it appeared that Joe Biden was the man most likely to be running against him in 2020 – which may no longer even be the probable scenario thanks to Elizabeth Warren’s progress – Trump wanted to take him out early.

With Biden in his crosshairs, Trump thought he had the perfect weapon. Biden’s son, Hunter, appeared to have been involved in some questionable business dealings inside Ukraine. An investigation had taken place inside the country into the company that the younger Biden worked for, and Trump wanted to make sure the whole world knew about it. Not only that, he wanted a conviction. What that, he could easily implicate Biden senior in the scandal. He had only one problem – the investigation was closed, and no charges had been brought.

On the now-infamous phone call, Trump appeared to pressure the new Ukrainian President into re-opening that investigation and delivering him a result he could use. The presence of a dangling carrot was implied – if the new President could do this for Trump, Trump might be able to see his way to restoring some financial support to the country – support that had recently been withdrawn on his own orders.

We should carefully note that Trump never explicitly made the quid pro quo offer on the call, but a whistleblower thought there was enough substance there to report it. Subsequent interviews with Trump officials that have taken place as part of the impeachment hearings would appear to confirm that the allegations are not without substance.

If Trump has done what he’s being accused of, then he’s abused the powers of his office, and due process says he should be removed. As we’ve seen in the past, though, due process means nothing to this President. He almost certainly won’t resign, and so it will come down to a question of whether the Democrats have the numbers they would need to impeach him.

The Democrats control the House. There’s almost no question at all that they’ll vote for articles of impeachment to be passed, and the matter will then move to the Senate for a trial. It’s there, where the Republicans hold a majority, that things become less clear. Thus far, even at times when Trump has said or done things that have outraged vast swathes of the population, the party has remained loyal to their man. It would take a significant number of Republican defections away from the cause to see the President impeached.

Could it happen? Absolutely. Various news reports suggest that the majority of Republicans would prefer Mike Pence to be their man for 2020, and that as many as 35 Republican senators would vote to impeach Trump if the ballot was held in secret. That won’t be the case, though. The voting will be public, and there’s a big question mark as to whether those same senators would have the courage to go against Trump in plain view – if those 35 potential defectors even exist at all.

Given the complexity of the situation, we don’t think it would be wise to bet on Trump being impeached. We don’t know enough about the true intentions of the senators who would be called upon to vote on such an issue, and gambling without informed knowledge of the outcome is the same as playing mobile slots. Trump knows a little bit about mobile slots – he is, after all, a seasoned casino operator. When it comes to casino games, the house wins more often than it loses. In this case, Trump is the house, and he’ll feel like the odds are on his side even if he does resent the process. Nothing is ever to be taken for granted in the world of politics, though, and if yet more damaging testimony appears during the impeachment inquiry, there will be some Republicans who find it increasingly difficult to maintain their support for their embattled President. As it now seems likely that the investigation will continue until December, Democrats will be crossing their fingers and hoping for a Christmas present that seemed impossible to receive mere months ago.