We are currently experiencing the worst housing market in the history of the United States. As a Chief Financial Officer for a Credit Union, I am often asked the following question on a daily basis: “When will the housing market return to normal?”  I am very careful replying where there is much subjection for the answer.

In attempt to answer this question, one has to review historical information that gives an understanding where we are today and what must happen to remedy the problem.  The first item that I review is the “Housing Starts” in the USA.  Listed below is the history of our Annual Housing Starts from 1958 to 2010.

As the data clearly shows, our housing starts began a dramatic decline beginning in 2005.  The decline continued its sharp descent through 2009.  Although there was an increase during 2010, the increase is the smallest we have experienced in our history.  One statistic that is alarming is the acceleration of the decline that began in 2005.

We have never experienced such a sharp decline in our history, and overcoming this chain of events will require economic growth at a pace that is greater than all of our economic recoveries in our history. 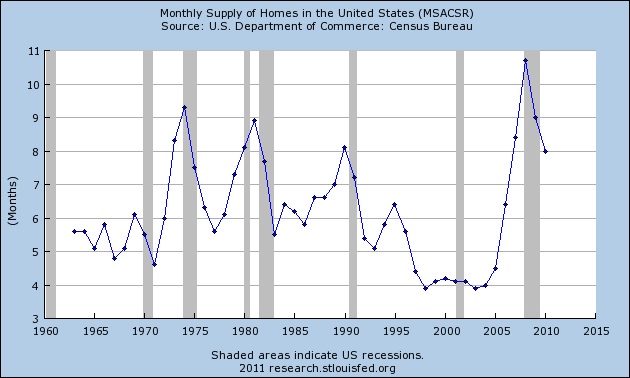 The supply of homes, measured in the number of months to liquidate, reached the highest level in our history of 10.5 months during 2009.  Although the monthly supply of homes declined during 2009 and 2010, 8 months is a high number compared to our historical average.

One issue this measure does not address is a fundamental weakness that I do not feel many economists are considering when making predictions for a housing recovery.  The numbers for the supply of homes is based on data provided by realtors in the United States.  What this does NOT include is the homes that are owned by Financial Institutions (Banks, Thrifts, Mortgage Companies, Insurance Companies, etc.), Federal Regulators (FDIC, OCC, OTS, FED, etc.), and the Government Agencies (FNMA, FHLMC, and GNMA).  Unless all of these institutions have their homes listed with a realtor, they are not included in the totals for the supply of homes.

All of these entities normally liquidate the homes internally, thus avoiding the use of a Realtor.  In addition, all of these entities are holding more homes on their books than any other time in our history.  If these numbers were available, the monthly supply of homes would be much longer than the numbers that are currently being reported.

The last measure that I feel is a good indicator of the health of the housing sector is the number of US New Home Sales.  The graph below shows the number of homes sold from 1963 through 2010. 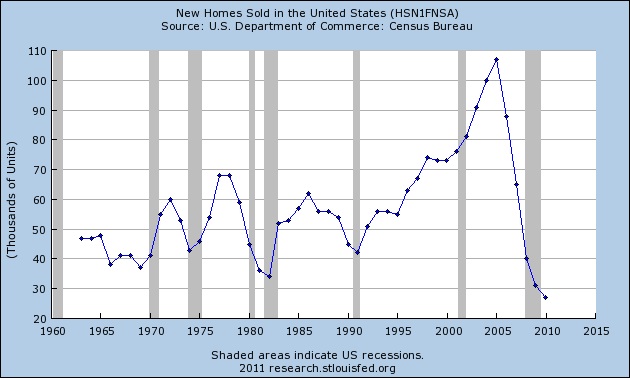 The number of new home sales peaked during 2005 and has descended rapidly since that time.  During 2010, we reached the lowest level in our history for new home sales since data was first measured in 1963.  Given the low level of consumer confidence and high unemployment, it does not appear this will improve for years to come.

There is other data that I could share, but this provides the most concise view of our current housing recovery.  This provides a domino effect on our economic outlook due to the number of people that work in or with the housing market.  This includes construction workers, engineers, architects, various suppliers, and a vast amount of other groups that depend on the housing market to provide an economic contribution to our economy and to the individuals that depend on this sector to provide jobs.

This leads me to the question, “is this the new normal for our housing market?”  Given the data and the interpretation of this data, it appears it will take 8 to 12 years for our housing sector to return to normal. I have always been an optimistic person, but I am also a realistic person.  The realist in me does not believe we will return to a normal housing market for years to come.

Kevin R Mullins is the Chief Financial Officer for Blackhills Federal Credit Union (BHFCU) located in Rapid City, SD.  Kevin has been in the financial services industry since 1987 and has served as a Chief Financial Officer since 1989. Kevin was born in central Kentucky.  He has spent all of his life in Kentucky until recently when he relocated to Rapid City, South Dakota.

Kevin received his BS Degree at Campbellsville University in 1987 with a double major in business administration and accounting.  After graduating from college, Kevin began his professional career with First & Farmers Bank (FFB) as a management trainee in 1987 and was promoted to Senior Vice-President & Chief Financial Officer in 1989.

After the sale of FFB, Kevin joined the Monticello Banking Company (MBC), a locally owned community bank, as Executive Vice-President & Chief Financial Officer.  Kevin remained at the Bank until June 2011. Kevin accepted a new career opportunity with the BHFCU in 2011 as their Chief Financial Officer, and continues to hold this position.

In his spare time, he enjoys spending time with his wife and two daughters.  His favorite hobby is boating and he is also a musician. Kevin also likes to spend time keeping updated with the changes in information technology.

Kevin currently serves on the Board of the Financial Managers Society (FMS), a national board for finance professionals serving the financial services industry that is based in Chicago, IL.  Kevin also serves as Chairman for the Strategic Issues & Planning Council for FMS.