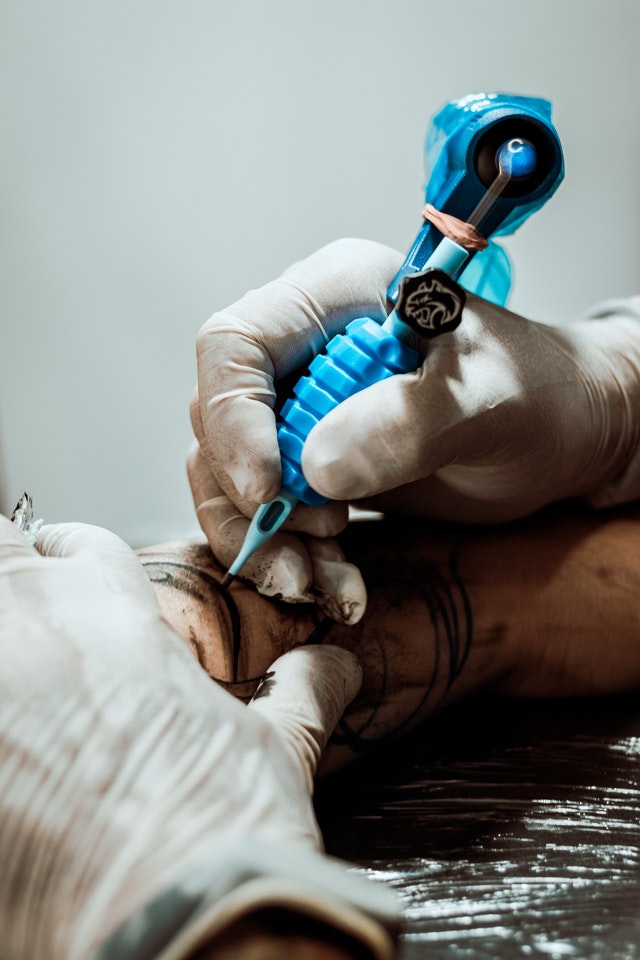 VendlerTattoo specialises in a novel sleeve style that coalesces black-and-grey tattoos inspired by rich LA culture, with Chicano art that he describes as “classic black-and-grey, but at its best”. The pairing of Vendler’s unique fusion of styles with his overall high quality and passion for his work has created a reputation that stretches globally. Following a piece of his becoming the most iconic female sleeve on Instagram in 2018, Vendler’s newfound reputation led him to working with many widely known personalities, but his art’s popularity peaked after his work with FC Bayern Munich superstars Javi Martinez and Lucas Hernandez. When Bayern subsequently secured the UEFA Champions cup, his brand was granted instant recognisability from the exposure of being plastered on TV screens and magazines alongside the UEFA trophy. Suddenly, Vendler’s Tattoos were identifiable worldwide by anybody with an insight into the tattoo industry, and all photos of his work became viral on Instagram – though this wasn’t always the case.

A Past Filled with Adversity

Growing up in East Zagreb, an area Vendler himself describes as a poverty-ridden and underprivileged, building a career in the tattoo industry was extremely difficult. For young and inexperienced artists, nobody wants to be tattooed by them due to their lack of experience and no one wants to teach them for similar reasons. The only option available was to grind a day job and spend all free time practicing; no parents, handouts or expensive tattoo kits to support him – just thousands of hours practicing his craft. When he eventually escaped the streets of Zagreb, Vendler began apprenticing at a small shop on the edge of Dublin, Ireland. After a year of making substantial progress there, he spent the following four years apprenticing under great artists from around the world; spending a year with each in order to progress enough to receive an offer from the next. This lasted until his breakthrough at the end of 2020, when he made the decision to work for himself. Since then, his success has only continued to grow: he was described as the most famous Croatian artist in the printed magazine of the country’s biggest media outlet “24sata”; and boasts one of the highest engagement rates amongst tattoo artists on Instagram, plus an ultra-loyal following – two incredibly important metrics in an industry dominated by social media presence.

Influences on the Present

Vendler, whilst a household name in the tattoo industry, is still working towards his goal of becoming truly famous. He credits this hunger for the growth of his business to his origins in East Zagreb; he never wanted to be the best artist in the city, he always intended to be regarded as one of the best in the world. This inspiring ambition to develop his eminent career was driven by the need to motivate others of similar life circumstances. As a fan of underdog stories, Vendler could fiercely relate to the beginnings of his heroes Arnold Schwarzenegger and 50 Cent in multiple ways, falling in love with their mindset and ideology of the ‘American Dream’. He adopted this into his own ethos of striving to go the extra mile in everything, paramountly work – which is undoubtedly the source of his success. His story represents an important message to everyone from underprivileged backgrounds that no matter their situation, they can change it.

A Plan for the Future

As briefly touched on above, Vendler intends to expand his business to new heights – outside of this broader goal of growth however, he has two more specific achievements he intends to complete. Vendler has been planning a release of his much-awaited own, unique brand of tattoo equipment – further solidifying his brand’s position in the tattoo industry. Moreover, Vendler plans to organise a plethora of seminars and tutorials to introduce his techniques to young, up-and-coming artists and consequently allow them to bypass some of the barriers that he had to overcome in a less complex and mentally-taxing way.