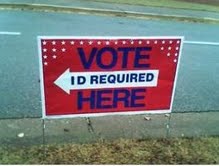 Many state legislatures across the country are trying to pass voter i.d. laws.  These laws vary from state to state but the basic premise they have in common is requiring voters to present a photo i.d. (or at least some type of identification) when voting.  It’s as simple as that.  Since there is proven voter fraud across the country, you would think everyone, especially politicians, would be for putting this law into place.  Funny thing, Democrats and left wing organizations are hysterical over these new laws being debated (and in some cased implemented).

Most states have several laws in place that require photo i.d., especially when there is an age limit attached to the law such as:

Purchasing certain Over The Counter medicines

So what is the big deal about requiring an i.d. to cast a vote?  According to left wing groups who are against the law:

“Many states have passed laws that go beyond the federal Help America Vote Act (HAVA) and require additional, unnecessary identification either at registration or voting. These restrictions hinder American citizens’ efforts to exercise their responsibility to participate in elections. These laws include requirements such as proof of citizenship, government-issued photo ID’s, any kind of photo ID, or a broad range of ID’s not necessarily including a photo.

Several of these ID laws have prompted lawsuits from voting rights advocates, because they disproportionately impact the elderly, students, women, people with disabilities, low-income people, and people of color. The resources on this page address the current state of legislation around the country regarding additional identification at voting, summarize recent litigation, and discuss the reasons why additional voter identification is an unnecessary burden designed to address a problem – voter impersonation – that is remarkably rare.”

The above is listed on Project Vote’s site.  Project Vote is the group that has been investigated by the FBI, along with ACORN, for voter registration fraud.  They have zero proof that mandating an identification to vote will actually suppress any votes, yet they still march ahead, almost hysterically, claiming these laws are a civil rights violation, amongst other things.  The truth is that there is undeniable proof that requiring an i.d. to vote does not suppress voters, it actually seems to do the opposite and increases voter turnout.

Between the 2004 and 2008 elections, two states had passed strict voter i.d. laws.  In what must have been a shocking fact for the anti-voter i.d. crowd, it was discovered that in both Georgia and Indiana – the two states with the most strict photo i.d. laws in place  – the percentage of people voting actually increased.  That’s correct, voters were not suppressed due to voter I.D. laws, they actually seemed to encourage even more people to vote and in all likelihood, less people to commit voter fraud.  According to Census Bureau, voting increased in Georgia by 7.4% and in Indiana by 1.9%.  This debunks the myth of the anti-voter i.d. crowd that mandating identification to vote will suppress votes.

What is remarkable is that the majority of voters actually want to see some type of identification requirement put into place as a voter requirement.  In a recent Rasmussen poll Democrats, Republicans and Independents polled all agreed by a whopping 75% with requiring some type of photo i.d.  From Newsmax:

“Support for laws that require producing a document such as a driver’s license crosses political boundaries with strong majority support among Republicans, Democrats and independents. Republicans support the idea by 85 percent; Democrats, 63 percent; and independents, 77, Rasmussen’s June 6-8 survey of 1,000 likely voters found. Only 18 percent oppose such laws.

Support for such laws has ranged from 75 percent to 82 percent since June 2006, Rasmussen notes.

Supporters believe the laws will decrease fraud, while opponents see them as suppressing minority and elderly American votes. Those surveyed, by a 48 to 29 percent margin, said letting ineligible people vote is a bigger problem than preventing legitimate voters from voting. Just 1 percent of those polled say they have ever been denied the right to vote.”

Essentially there is no reason not to require a photo I.D. to vote.  There are proven cases of voter fraud; requiring identification has proven not to suppress votes; the majority of voters desire that identification be required and it’s a simple addition to add to elections laws in any state.  The argument from the left is nothing but empty rhetoric with no factual statistics to back up their ‘reasoning’.  Since most laws that have age as a requirement also mandate photo identification, it makes sense that voting should be added to the list as well.  It’s not taking away someone’s freedom or suppressing someone’s vote.  Voter identification laws will help increase the integrity of elections across the country.  Voter I.D. laws will suppress voter fraud, not voters.