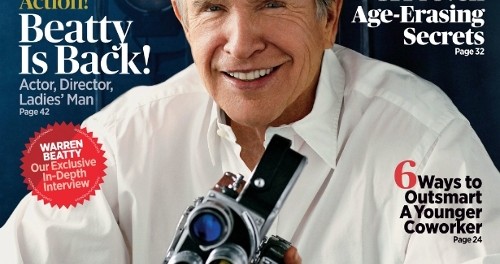 For much of the past two decades, Warren Beatty has kept himself out of the public eye. In an exclusive interview with AARP The Magazine (ATM), Beatty gives us a peek into what he’s been doing these past years, and opens up about nearly every aspect of his life—from his humble beginnings to his reputation as a sex symbol on and off screen to his enduring marriage to Annette  Bening.

The stories Beatty tells reveal the man he is today: a Hollywood playboy transformed into a dedicated family man…who’s now re-entering the limelight as co-star, director, producer, and writer of the new romantic comedy-drama Rules Don’t Apply, in which he plays Howard Hughes. Though Beatty and Hughes never met, some similarities are striking. Like Hughes, Beatty has charm, curiosity, and a self-confessed control-freak nature. And, like Hughes, Beatty met with success at a young  age.

Beatty’s success began with his first film role in 1961 when he co-starred with Natalie Wood in Splendor in the Grass. He’s been a movie star ever since. Forty years in the movie industry have granted him the status of legend, with lead roles in such classics as Bonnie and Clyde, Shampoo, Dick Tracy, and Bugsy, and writer-actor-director credits for Reds, Heaven Can Wait, and Bulworth. Beatty may have left the limelight for a time, but as this interview shows, his star power hasn’t  dimmed.

The following are excerpts from the October/November issue of the AARP The Magazine cover story featuring Warren Beatty, available in homes starting October 1st and available online now at  www.aarp.org/magazine/.

On his dating history in  Hollywood

He insists there is wild hyperbole in his reputation as a man-slut and disputes the mathematics of the 12,775 women one of his biographers, Peter Biskind, has claimed for him. “Think about it, sleeping with 12,775 people,” he says, not without a certain amount of glee. “That would mean not just that there were multiple people a day, but that there was no  repetition.”

So let’s say for the sake of argument it wasn’t 12,775. Let’s say it was a few hundred…and why is it nobody seems mad at him…everyone wants to know the secret of bedding half of Hollywoodand not having them want you  dead.

Beatty just blinks at me innocently, with a kind of guileless sincerity. “Look, I never misled anyone,” he says. “And…and I’m a nice  guy.”

On maintaining an illusion of beauty and success in  Hollywood

“You’re participating in a profession that, for obvious reasons, needs to heighten elements of sexuality,” especially “if you delay marriage for a long  time.”

He had often been involved with his leading ladies, but this was not the case when he worked with Bening in Bugsy. “During the making of the movie, there was no suggestion as to a future relationship,” Beatty says. “I mean, there was in my head, but otherwise, no.” When filming started, he told her, “You don’t have to worry about me.” And she said, “Well, I didn’t  ask.”

On his marriage of 24 years to Annette  Bening

He sees a clear demarcation in his life – BA and AA, Before Annette and After Annette… “I waited a long time to be married,” he continues. “When you don’t get married until you’re 54…well, as Arthur Miller said, ‘it comes with the territory.’ He refers to a line in the playwright’s Death of a Salesman. “A salesman is got to dream, boy. It comes with the  territory.”

“There’s always a part of what he’s doing that’s private,” Bening says, “but we talk a lot about everything. Some people pay lip service to listening to others and they’re really not listening. He does. He loves actors, and while he’s shooting he’s always interested in what people are saying. He’s a terrific  audience.”

Annette Bening on having Beatty around the  house

After having him at home for almost two decades, it must have been difficult to have him focused on something other than their family. “Are you kidding?” she says, laughing. “I was like, ‘I am ready to kill you. Just make the movie, please, please, please.’ But like other people at his level of talent, he does it when he’s ready. And no one’s saying anything made a difference, including  me.”

His thoughts on becoming an  actor

Beatty insists that for a long time, “I resisted knowing I was interested in acting. I guess the word you’d use would be ‘shy.’ I preferred  sports.”

On his filmmaking  process

“I have often compared making a movie to vomiting,” Beatty says. “I don’t like to vomit. But there are times I think, Maybe I’ll just feel better if I go ahead and throw up. So then I make the  movie.”

On a Dick Tracy  sequel

“I liked the original very much, and it was very profitable,” he says. “Jeffrey Katzenberg once asked me to do a sequel. At the time, I thought sequels were beneath me. Now I realize how far below sequels I  am.”

On being a famous  father

“Being an older father doesn’t seem to be an issue for him. Being a famous father does: “It’s a burden to be the child of not only one famous parent, but  two.”

Beatty on the idea of living on through his  children

“DNA becomes more relevant as we get older,” he says. His four children – Stephen, 24 (who has cofounded Vetch, a poetry journal for transgender writers); Benjamin 22, an actor; Isabel, 19; and Ella, 16 – are “by far the best thing that happened to  me.”

“You know you’re old when you’re asked, ‘do you have hobbies?'” he says, smiling. “No. It’s a luxury to spend time with your family. And I was always mulling  projects.”

About AARP The  Magazine
With nearly 36 million readers, AARP The Magazine is the world’s largest circulation magazine and the definitive lifestyle publication for Americans 50+. AARP The Magazine delivers comprehensive content through health and fitness features, financial guidance, consumer interest information and tips, celebrity interviews, and book and movie reviews. AARP The Magazine was founded in 1958 and is published bimonthly in print and continually online. Learn more atwww.aarp.org/magazine/. Twitter:  twitter.com/AARP

About  AARP
AARP is a nonprofit, nonpartisan organization, with a membership of nearly 38 million that helps people turn their goals and dreams into ‘Real Possibilities’ by changing the way America defines aging. With staffed offices in all 50 states, the District of Columbia, Puerto Rico, and the U.S. Virgin Islands, AARP works to strengthen communities and promote the issues that matter most to families such as healthcare security, financial security and personal fulfillment. AARP also advocates for individuals in the marketplace by selecting products and services of high quality and value to carry the AARP name. As a trusted source for news and information, AARP produces the world’s largest circulation magazine, AARP The Magazine and AARP Bulletin. AARP does not endorse candidates for public office or make contributions to political campaigns or candidates. To learn more, visitwww.aarp.org or follow @aarp and our CEO @JoAnn_Jenkins on  Twitter.