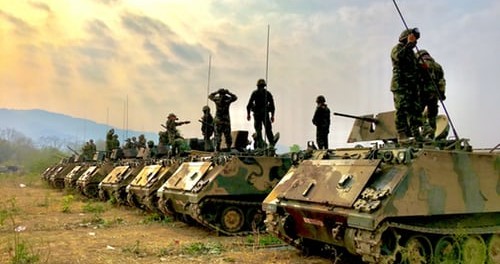 Battlefields are always changing; not just in terms of location, but also in the types of threats that are prevalent. The weapons used in today’s conflicts are not necessarily the same as those a decade away, let alone several decades ago. Fortunately, as threats change so too do the kinds of protection that are available to troops in armored vehicles. These are driven by both technological advances and also shifting demands that stem from the various threats faced by modern forces. New types of protective gear range from advances in innovations like armored troop seats that can survive explosive attacks to new countermeasures able to stop enemy attacks before they strike. All of this is in the service of increased soldier survivability.

One of the biggest military shifts in recent decades has been the increase of asymmetric warfare. This is frequently characterized as involving large organized forces against small paramilitary cells and remote-control unmanned assets. In these conflicts, the smaller paramilitary cells frequently use difficult local terrain to their advantage.

Without a doubt the most common modern weapon in this type of asymmetric warfare are so-called IEDs (improvised explosive devices). This category of weapon is increasingly widely used, largely due to their accessibility. Groups without large military budgets can easily source the component parts to build an IED. They also require non-expert rudimentary assembly to build. They can be deployed by enemies for roadside attacks without them having to risk direct confrontations with more highly trained, better armed forces.

Despite being relatively primitive weapons, IEDs can be deployed to devastating effect. IEDs can damage or destroy targeted vehicles, kill troops, disrupt traffic, or negatively impact lines of communication. In some cases, smaller IEDs are used to kill or injure anyone who tries to enter a premises. In other cases, large vehicle-based IEDs such as car or truck bombs can destroy entire installations. A review of international media reports from 2011 through 2015 revealed more than 6,300 recorded IED explosions. These resulted in over 105,000 casualties.

Fortunately, modern armored vehicles are rising to the challenge. One growing type of protection involves mine sweeping equipment (including robots) and detection software that can be used to eliminate IEDs and clear routes without putting humans at risk.

Another weapon frequently employed in modern battlefields, especially in asymmetric warfare, are hit-and-run mortar and rocket strikes. In these attacks, insurgents quickly fire off mortar rounds or rockets and escape before their location can be identified. In urban environments, heavily populated areas can be used to avoid counterfire, while insurgents in more rural areas will use cover such as trees for concealment.

The most proactive countermeasures against these attacks are active protection systems (APS). APS means rigging a tank or other armored vehicle with special sensors (most commonly millimetric wave radars) which detect incoming projectiles. When the anti-tank round has reached a certain distance, the APS launches an interceptor rocket designed to eliminate the incoming threat. Such active protection systems are both lightweight and effective, and more affordable than adding more armor to tanks. Modern ABS systems can react to missiles and rockets in under a second.

Armor is adapting as well

Proactive tools like mine-sweeping technology and active protection system are a game-changer. However, modern armored vehicles have also continued to innovate when it comes to the way that they protect themselves (and, more importantly, their inhabitants) against attacks. New types of camouflage are being created to not just confuse the human eye, but also to do things like reduce the infrared signature of vehicles. Since modern battlefields include smart technologies that gather situational awareness from far more than just visible enemies, these kinds of advances will be crucial.

But while camouflage and countermeasure technologies are crucial for avoiding vehicles sustaining damage, there have also been significant advances when it comes to developing new types of more protective armor. These innovations allow vehicles to sustain more direct hits, while not sacrificing (and even improving) on things like speed or the ability to travel across challenging terrains. With the rise of threats like IEDs, there is more focus than ever on protecting the underside of vehicles using armor. Examples of such innovation include blast protecting seats or floating floors which can be utilized in vehicle interior to minimize damage by isolating crew from vehicle floors. In the event of a blast, such additions form a buffer that’s designed to protect crew from blast impact.

These technologies will continue to develop as new possibilities (and requirements) raise their head. Thanks to such advances, troops and vehicles can be better protected in environments that can be extremely dangerous. There’s no “one size fits all” solution to dealing with modern battlefield threats. But a combination of these approaches puts servicemen and women in the best possible position to safely eliminate threats wherever they occur.