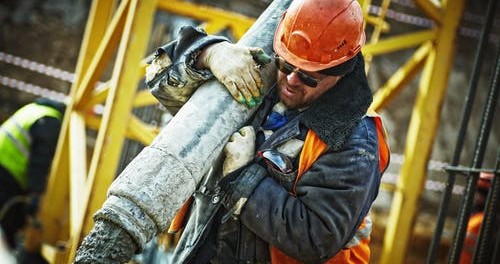 Worker safety isn’t something that most people consider when they’re choosing their career. Sometimes we don’t even choose our career! Maybe a career advisor at high school suggested a direction and that always made sense to pursue. Other times, natural skills relating to technology or just being good with your hands led to working in the construction industry, oil rig work, a doctor, a programmer or another profession.

In this article, we consider what industries are less safe for employees.

Construction workers face a unique set of risks when carrying out their jobs. Machinery can malfunction, scaffolding can fail, and objects can fall down onto unsuspecting workers.

There are over 100 accidents in New York alone most years in the construction industry. This varies depending on the number of ongoing construction projects and how strongly safety regulations are adhered to.

The majority of accidents occur due to falls from a height or flying objects from a dropped hammer to items with more heft, which can pick up deadly speed on the descent to ground level.

The intrepid track marshals that stand behind the protective barriers at motorsport events like Formula 1, NASCAR and other racing events put it all on the line.

In the event of an accident with a car or motorcycle driver on the track, the vehicle or bike often comes careening into the barriers and sometimes right over the top of them. The marshals are tasked with running to the side of the track and sometimes onto it to pull the driver away to safety.

Some marshals have lost their lives in the process of doing this risky job. That doesn’t stop the marshalsfrom going out there and doing it again when the next racing meet happens. Thankfully, the protective barriers at both the Formula 1 track and NASCAR have been improved over the years, but racing is still inherently unpredictable.

Oil rig workers are on the rig for weeks at a time. They’re flown out there and they live on it while working long shifts.

Given the hard work with heavy machinery and the potential for a slippery oil gusher, oil rig workers are prone to have accidents out at sea where there’s little protection available. Medical care is also a helicopter flight away in most cases too.

What to Do If You’ve Been Injured at Work?

When you’ve been injured either at a work site or elsewhere when on the clock, then there’s the potential for significant medical expenses that won’t be fully covered. Given that most people are very upset following an accident, they’re not in a suitable mindset to represent themselves against their current employer to seek a reasonable settlement.

It’s a good move to hire a lawyer to deal with a personal workplace injury. Greenberg and Stein construction accident lawyers deal with a variety of personal injury cases including construction ones where workers have had an accident on a construction site. Given that close to one-fifth of accidents happen within the construction industry, that’s not all that surprising.

When choosing to work in an industry that’s inherently riskier, it pays to be insured where possible. Also, should something happen, hiring an attorney protects your interests far better than trying to handle the matter yourself at a difficult time.