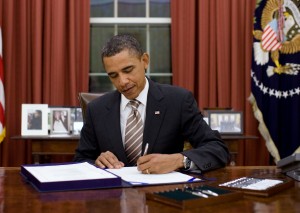 Before Barack Obama was even elected he was called a “law breaker” by many Americans who didn’t believe the Senator had met the basic requirement of being a natural born citizen.

It didn’t end there. Immediately after being elected, elected officials of both parties challenged the constitutionality of the President’s use of “Czars” rather than appointing individuals who had to face Senate approval, such as cabinet officials. Liberal Senator Robert Byrd (D-WV) wrote a scathing letter to the President, stating “As presidential assistants and advisers, these White House staffers are not accountable for their actions to the Congress, to cabinet officials and to virtually anyone but the president,” Byrd wrote. “They rarely testify before congressional committees, and often shield the information and decision-making process behind the assertion of executive privilege. In too many instances, White House staff have been allowed to inhibit openness and transparency, and reduce accountability.” Still, Byrd was an anomaly. The vast majority of his Democrat colleagues had no problem with Obama’s “power grab.”

Obama has also been criticized for his very selective enforcement of the law; yet Article 2, section 3 of the Constitution mandates that the laws be “faithfully executed.” He has not enforced laws on immigration, did not defend the Defense of Marriage Act in courts, and even failed to fully enforce federal voting laws.

Obama has used executive orders to augment what he could not get pass into law. He implemented “cap & trade” provisions in the EPA bill that did not pass the US Senate. He made GM, a major US auto company, into a government entity, and even ordered a