The report, entitled “Tell My Mother I Miss Her,” confirms that Coptic women and girls are deceptively lured or abducted into forced marriages with Muslim men and then to conversions to Islam, which frequently take place under duress and physical abuse. 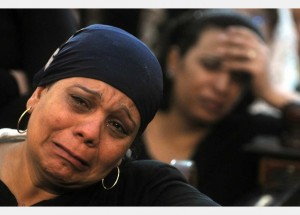 The report’s co-authors, Michele Clark, adjunct professor at George Washington University, and Coptic human rights activist Nadia Ghaly, undertook research in Egypt in November 2011 in the midst of the uprising that resulted in the political ascent of the Muslim Brotherhood and other radical Islamist forces. According to Clark and Ghaly, the disappearance of Coptic women and girls has “escalated” since the overthrow of President Hosni Mubarak in February 2011.

“Tell My Mother I Miss Her” was released in connection with today’s Congressional Helsinki Commission hearing on violence against Coptic women in Egypt, chaired by Congressman Chris Smith.  Speaking as a witness before the hearing, Professor Clark stated, “Coptic women in Egypt are disappearing from their homes, their schools and their jobs.  These cases are not allegations.”

The hearing also featured testimony from an Egyptian Christian woman who received asylum in the United States after narrowly escaping abduction in Alexandria in January 2011.  She was rescued by a doorman who saw her and her infant daughter being dragged into a taxi by a man shouting that she was “an enemy of Islam.”

Congressman Chris Smith (R-NJ), who chaired the hearing, called the forced disappearances “an outrageous crime,” and called the U.S. State Department’s failure to respond to repeated requests from the Commission to investigate the disappearances “appalling.”

Dr. John Eibner, the CEO of CSI-USA, called on the U.S. State Department and non-governmental organizations that specialize in women’s rights, human trafficking and religious liberty to conduct further research into this crime, commenting that, “Denial and obfuscation will neither help victimized Christian women, nor challenge the religious bigotry and sexism that impedes the development of democracy in Egypt.”

The new report can be accessed online at:  http://csi-usa.org/TellMyMotherIMissHer.pdf. It should be read in conjunction with the 2009 report, which is available at http://www.csi-int.org/pdfs/csi_coptic_report.pdf.