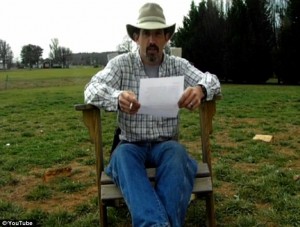 Tommy Jordan has gotten tired of his disrespectful daughter and he is taking that message to a huge YouTube audience.  In his short video he reads his daughter’s letter about how “terribly” she is treated and then he thoroughly dismisses the criticism.  Then he proceeds to pull out a gun and fill the computer she wrote her complaint on full of lead.  It is truly memorable indeed.

From the media personalities and writers who have been discussing it, you would think they expected a negative reaction from parents around the country, but instead the response has been overwhelmingly favorable for the father.  We live in one of the most entitled era’s in human history and our young people will suffer all the more because of this.  I believe this father has captured the frustration of a who generation of parents who are tired of a media that fosters the entitlement mentality pervasive in today’s youth and a culture that defines discipline as “abuse.”

I believe this daughter might actually learn from this lesson, since today’s youth are so concerned about how they are perceived by others.  Approximately 90 percent of the comments about the video is in support of the parents.  On my Facebook page, more than one person said that “if this is abuse, my parents would be in prison.” But these same people believe their parents were wise and fair in retrospect. Tommy Jordan is the poster child of a generation of parents who have become fed up with the media elite and its desire for us to create a selfish, narcissistic, and entitled generation. The actions of Jordan are seen by many as a needed way to take the children back.