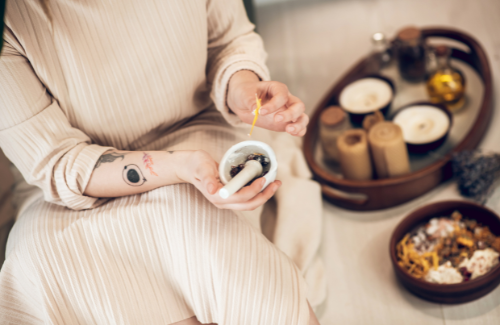 I hope you are having a wonderful holiday season, be sure to check out my commentary on “Surviving the Holidays Without Losing Your Mind” which can be found at DailyTelegraphUSA.com.

When many people think of natural healing, they are sometimes skeptical.  In our modern western world we are accustomed to pills, procedures and other quick fixes.  We are a society filled with instant gratification, shiny objects and instantaneous results. The Ancient Roots of Holistic Health date back almost 5,000 years. And yes there have been some wonderful advances in modern medicine, but these ancient practices are to be considered as well. Two of the most well documented ancient holistic health traditions are Traditional Chinese Medicine (TCM) and  Ayurveda. TCM originated almost 5,000 years ago and has continued to evolve into a complex system of diagnostic and treatment methods that are still practiced today. Throughout history, there have been natural healers that have used herbal supplements to treat illnesses.The role of Women as healers in the Middle Ages has been paramount in progression towards modern medicine.During the Middle Ages, women held many social roles. They were peasants, mothers, abbesses, writers, scientists, and scholars. They were also teachers of various trades.Women were also responsible for community health, particularly during childbirth. During this period, childbirth was viewed as a life-threatening situation. They were given a special role in women’s health care, a position that included midwives and herbalists. The wounded hunters and workers were tended to by women, often being referred to as “women of the fields”. They were involved in all aspects of human knowledge, including medicine.The Catholic Church was the ruling church at this time and had a special interest in controlling medicine. They believed that each substance had a “signature” that could cure the ailments of the body. It was a practice that dates back to ancient times, when people considered herbal knowledge to be magic as well as imperative for their healing.

Wendy Bjork, The Empress of MS, founder of heartsofwellness.com/you.

An extreme pioneer in advocacy and mentorship, Wendy is leading a global revolution to change the face of Multiple Sclerosis.

In living with MS for over 30 years, she wishes to bridge the many gaps in care.

She empowers women by sharing the keys to begin their healing journey as well as igniting their most dynamic self.

Wendy has authored two books and co-authored a third, “Fired Up!” which is a #1 International bestseller. She contributes to the National MS Society’s Momentum Magazine.  She is regularly invited on discussions, podcasts, interviews to share her story and is a regular contributor on the Price of Business.com platforms.