By Consumer Reports, Special for US Daily Review. 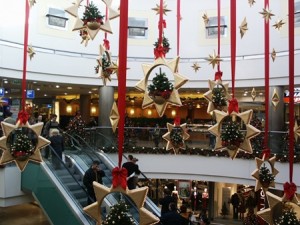 If you’re a grimacing grinch or a holiday humbug you’re not alone. Some 35 million Americans actually dread having to be nice during the holidays, according to a recent poll by Consumer Reports.

The survey of holiday jeers, conducted by the Consumer Reports National Research Center asked a nationally representative sample of Americans what, if anything they dread from a list of holiday activities.  Apparently it’s not all peppermint and presents at this joyous time of year— a whopping 90 percent noted at least one thing they dreaded about the winter holidays.

“For all the chatter about nostalgia, family fun and gift giving this time of year, many people don’t like too much of a good thing,” said Tod Marks, senior editor at Consumer Reports.

Among the list of jeers that frosted folks the most: waiting in lines and crowds (68 percent), putting on weight (37 percent), getting into debt (37 percent), and holiday shopping (28 Percent).

The holiday shopping hassles aren’t the only fly in the eggnog. While many people believe there is nothing better than the joy of making memories with family and friends, not so said respondents. In addition to the 16 percent that dreaded having to be nice to people, 24 percent said they dreaded seeing relatives and 15 percent said they did not look forward to attending holiday parties and events.

What about all those cheery carols and other signature music of the season? One in four Americans say humbug, roughly the same percentage who dreaded traveling to attend all those parties and visiting loved ones.

“For many folks, the holidays are a lot like the Super Bowl. Even if you’re not a football fan you watch the game because it’s a big event. With the holidays, you may not like the game, but it’s part and parcel of the season. It’s just what we all do,” said Marks.

For more information on the latest holiday jeers poll data from Consumer Reports visit www.ConsumerReports.org or click on this link:

The Consumer Reports National Research Center conducted a telephone survey of a nationally representative probability sample of telephone households. 1,013 interviews were completed among adults aged 18+ between November 4-7, 2011. The margin of error is +/- 3.1% points at a 95% confidence level. To allow for year-over-year trending, data was standardized for consistency.

Consumer Reports is the world’s largest independent product-testing organization. Using its more than 50 labs, auto test center, and survey research center, the nonprofit rates thousands of products and services annually. Founded in 1936, Consumer Reports has over 8 million subscribers to its magazine, website and other publications.   Its advocacy division, Consumers Union, works for health reform, food and product safety, financial reform, and other consumer issues in Washington, D.C., the states, and in the marketplace.