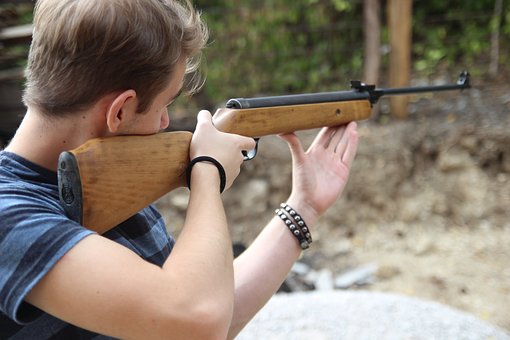 Six-year-old Wisconsin hunter Lexi Harris shot her first buck the opening weekend of hunting season this year, following the state’s passage of a new law allowing children under 10 to hunt while within arm’s-length of an adult. Lexi sat patiently for a whole day before her persistence paid off the second day of the season. Her father was overjoyed at her success, and the state Department of Natural Resources proudly tweeted a picture of Lexi with her  buck.

As Lexi’s success story illustrates, children can learn gun safety and marksmanship at a young age when properly trained and supervised. This can help them learn responsibility and instill a sense of pride as well as teaching them the right way to safely handle firearms. Here are four steps to successfully teaching your kids firearm safety and  skills.

Point Guns in a Safe Direction at All Times

One of the first principles of safe gun handling children should learn is to point a gun’s muzzle in a safe direction at all times, says airgun manufacturer Daisy. Guns should be held pointing down and away from the holder to their side so that they’re not aiming at their own feet or any part of their own body. Guns should never be pointed toward another person or in a direction where someone else might be  located.

The next lesson children should learn is to always assume that firearms are loaded. The last person who handled a gun may have failed to empty it, so firearms should always be treated as if they were loaded. Children should not assume a firearm is unloaded just because someone tells them it is. Even if a firearm doesn’t go off when fired, it may have been misfed, and the magazine may still contain ammunition. You can teach children more about how ammunition works by taking them to an ammunition supplier and showing them how a gun is loaded and what happens when a weapon is  fired.

A third important lesson is to never load a firearm, cock it or touch the trigger until it’s time to shoot. An unloaded weapon can’t hurt anyone, but a loaded gun always represents a potential accident. It’s also risky to touch the trigger of a gun when it’s not needed. Teach children to pick up firearms with their finger placed outside the trigger guard and not inside it. This is the opposite of what is often depicted in movies and on television, so a good way to reinforce this lesson is to teach children to point out incorrect gun handling in films and TV  shows.

Look Past the Target

A fourth vital lesson is to look and think past targets before shooting. Children should learn to make sure no one is behind or near targets before pulling a trigger. This will help avoid accidents resulting from a bullet missing its target to the side or passing through a target and hitting someone beyond it. Teach children to always check if they’re not sure someone is in the area before  shooting.

Following these steps will help ensure that your children have a fun and safe firearms experience. If your children are still too young to start learning how to shoot, consider first signing them up for the NRA’s Eddie Eagle GunSafe program, which is designed to teach children from preschool to 4th grade how to avoid gun accidents. This can be a step toward taking a gun safety and marksmanship course under a qualified NRA  instructor.