By  GenFKD, Special for  USDR

The vast majority of recent college graduates believe that the current presidential candidates are not talking about the issues that matter most to them, according to a new survey of millennials by GenFKD, a non-partisan organization dedicated to promoting economic understanding and financial literacy to college students and recent  graduates.

Millennials account for 36 percent of eligible voters, the largest demographic in the 2016 election, according to ThinkProgress.  Despite their voting power, 86 percent of those 18 to 34 say this year’s presidential candidates are not addressing them or their key issues they care most  about.

“It is very disappointing that the presidential candidates are ignoring a vital demographic group and the issues that matter most to millennials,” said Justin Dent, president and co-founder of GenFKD. “With an uncertain economy and international instability, millennials are more engaged than ever in the upcoming election, yet they are left out of the  discussion.”

GenFKD polled 752 millennials through Survey Monkey to determine which issues most concern them and if they felt their concerns were being adequately acknowledged in the national  debate.

“Millennials are clearly concerned about the economy they will inherit, and the opportunities available to them,” said Christopher Koopman of the Mercatus Institute at George Mason University.   “Unfortunately, political candidates have a strong incentive to support special interests over the causes that matter most to young people. There is a danger in doing that because millennials are concerned, active, and  engaged.”

“Until now, there have been less than a handful of millennial issues addressed in hours and hours of debates and interviews,” said Dent, a student at the University of Maryland. “We’re worried about jobs and graduating into a nation of the  underemployed.”

GenFKD is a non-partisan peer-to-peer organization that utilizes editorial content and grassroots organizing to engage millennials on economic and financial public policy and basic pocketbook finance. The non-profit organization seeks to utilize its expansive social following and network of 28 college chapters to present critical information relating to jobs and the economy in a way that is informative, approachable and  useful.

The GenFKD “Millennial Sentiment” survey was conducted online December 15-22, 2015, among a national sample of 752 adults between the ages of 18 and 34. Respondents for this non-probability survey were selected using a SurveyMonkey Audience. As the sample for the survey self-selected for participation, sampling error cannot be  calculated. 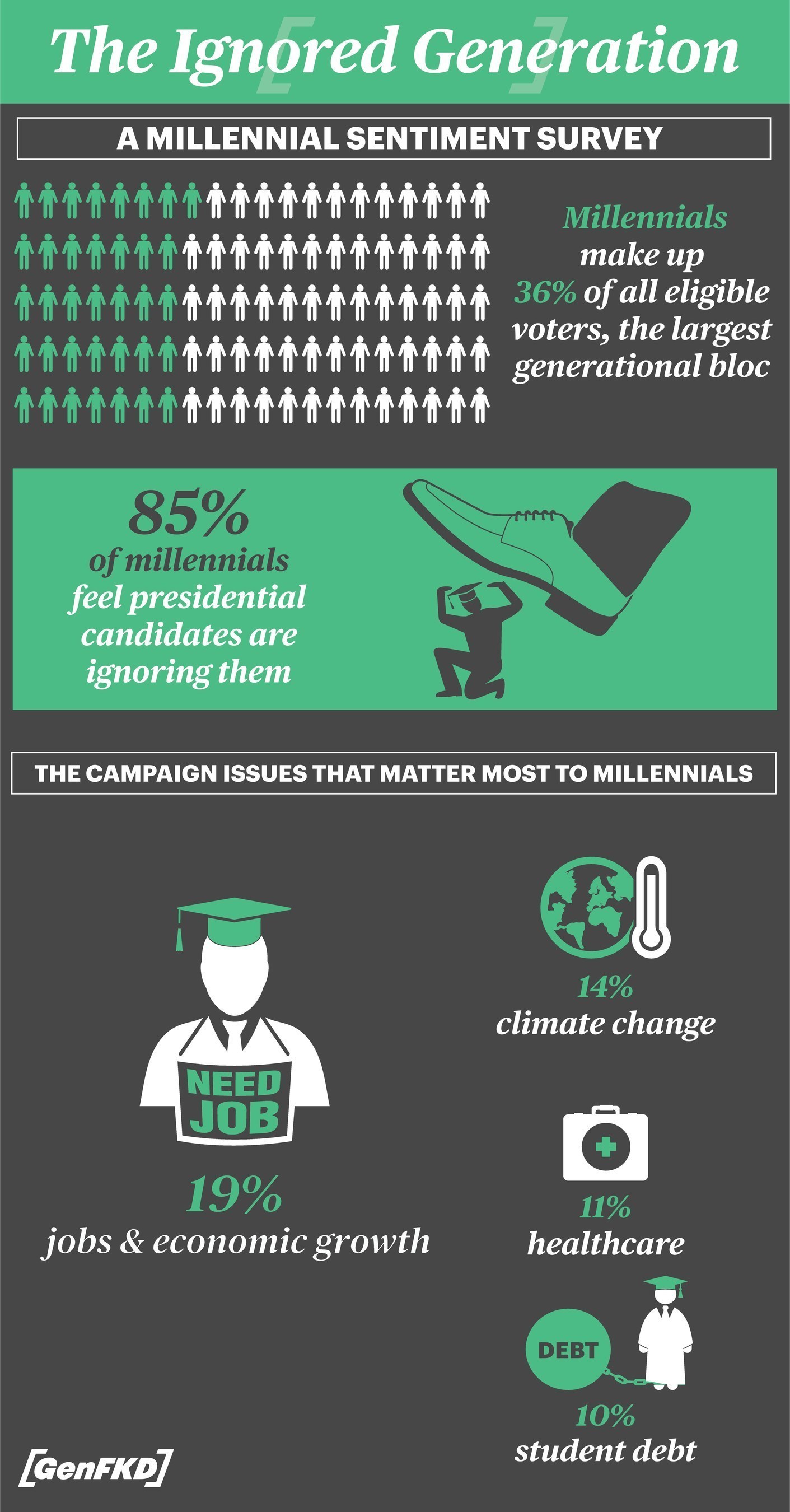