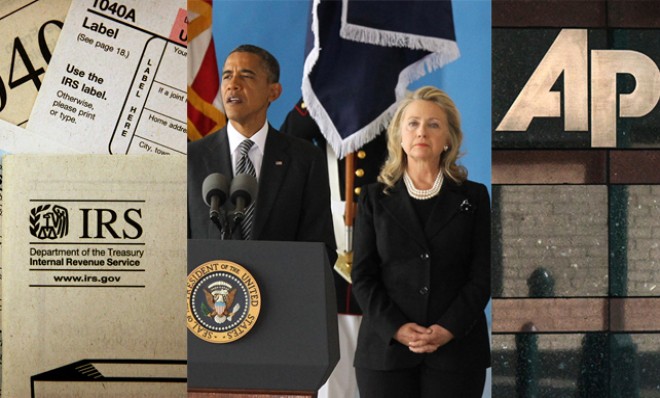 A perfect storm of scandals is what Barack Obama faces. Democrats decry the scandals, saying that Republicans are merely politicizing them because Barack Obama is, as Congresswoman Nancy Pelosi gushes to the press, “such a good president.” But let’s face facts, unless you are highly delusional, what America is facing now is unprecedented in our nation’s history.

In Barack Obama’s first term he faced a lot of controversy, the biggest of which was the now defunct Fast & Furious gunrunning scam. Obama decided the program that George W. Bush shut down could be run properly under his administration. So he blithely ordered guns to be run into Mexico to the drug cartels, and in his feverish delight, Obama felt they would be able to bring the cartels to their knees. In reality, by the time Fast & Furious had run its course two members of America’s law enforcement community were dead. The Border Patrol’s Brian Terry and ICE Agent Jamie Zapata were both killed by bullets fired from Fast & Furious guns.

Though proven, according to my sources, to go all the way to the Oval Office, those responsible for Fast & Furious have never been brought to justice, and likely never will.

Scandal #1: On 11 September of 2012 the U.S. Consulate (now downgraded to a “mission” by the Obama White House) in Benghazi, Libya was attacked. Those inside were burned out, Captain Sean Smith (U.S. Air Force, Ret.) was killed in the first wave and U.S. Ambassador Chris Stevens was kidnapped, brutally tortured and murdered before his body was returned to the embassy.

The 30 plus consulate staff still alive were rescued by retired U.S. Navy SEAL Tyrone Woods and two of his C.I.A. buddies on Wood’s first run. Taking fire the entire time, they raced back to the C.I.A. Annex. By the time Tyrone Woods headed back to the consulate to look for the Ambassador, retired U.S. Navy SEAL Glen Doherty had arrived from Signella Air Force Base in Italy. Woods and Doherty arrived at the consulate to find the battered and bloody body of Ambassador Chris Stevens.

Before the night was over, Doherty and Woods would meet their end at the hands of the Benghazi terrorists from the Al Qaeda affiliated Ansar al Sharia. Although Ambassador Stevens had repeatedly asked for additional security for several months leading up to the attack. Although Hillary Clinton actually spoke to Gregory Hicks and was informed it was a terrorist attack; Obama, Clinton and Panetta made an unholy alliance to lie to the American people in order to preserve Obama’s election hopes. The cover up which ensued made Watergate look like child’s play.

Scandal #2: The Internal Revenue Service, run by Barack Obama sycophants, decided they would do their part to ensure an Obama victory on November 6, 2012. After the passage of the first stimulus package, the American people rose up and let their voiced outrage be heard. Some in Congress heard, some did not. But the U.S. Congress was controlled by Democrats then, as was the White House. They rammed it through anyway and then started in on Obamacare aka the Affordable Patient Care Act. The citizens of America organized themselves, created 501c3’s and 501c4’s and filed the proper paperwork with the IRS, and began to fight back within the bounds of the law. That’s when the abuse began.

The IRS began an unprecedented string of abuses, targeting any and all organizations that used the words or phrases “9/12”, “tea party”, “patriot”, “build a stronger America”, “Constitution”, Jewish Conservatives, Hispanic Conservatives, and more. All were specifically and maliciously targeted and put through ridiculous and probing inquiries, including asking for the “prayers” of members, or if any of their members were going to run for office, etc. Many never received the legal status they’d filed for, being bankrupted before the IRS was done playing political partisan games  What is unfolding in the House of Representatives hearings right now is stunning, to say the least.

Scandal #3: The Department of Justice v. Associated Press and other reporters. Eric Holder’s DOJ, long deciding they didn’t have to obey the laws of the land, decided they were within their rights to bug the AP, reporters from other news organizations, and even the cloakroom in the House of Representatives through the bugging of reporters’ phones. In so doing, they clearly violated the 1st Amendment rights of the press. Did they have a subpoena? Yes. Did serve it? No. They decided to simply tap and record the phone lines of hundreds of reporters, violating the 1st Amendment rights of America’s free press.

The three scandals together present a perfect storm, one that could, and should, bring Barack Obama well into impeachment proceedings. But will it? Will Barack Obama escape unscathed again because Congress is unwilling to do it’s job? Well, let me rephrase, the investigations are being done by the individual committees. Twenty-two articles of impeachment sit on Speaker John Boehner’s desk, and he refuses to do anything about it. So Barack Obama may remain as our president despite the fact we have six dead Americans, the constitutional rights of the press violated, and Americans unduly, and criminally, targeted by the Internal Revenue Service.

This is only the beginning as layer after layer of this particularly rotten onion is peeled back. America, what have we wrought?