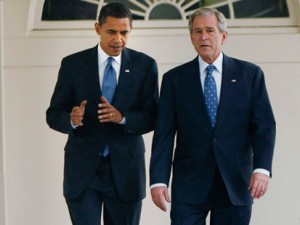 M-F at 8 pm CST on 1110 KTEK, hosted by US Daily Review Publisher/Editor in Chief, Kevin Price.
Brian Darling, who is a leading government authority from the Heritage Foundation in Washington, DC, was recently on the program to discuss the recent visit by George Bush to the Obama White House for the unveiling of the 43rd president’s official painting and that of the first lady.  It was an unusually warm and cordial moment in one of the most polarizing political environments in US History. What is its significance going forward?
Watch that interview.
About Brian Darling

As senior fellow in government studies at The Heritage Foundation, Brian Darling monitors political developments in the U.S. Senate, the House of Representatives and the White House to assess the likely impact on policy decisions of interest to Heritage.

Darling’s comments on matters before Congress are quoted by leading newspapers and websites. He appears as a guest expert on broadcast and cable TV news programs, including those on Fox News Channel, Fox Business News, CNBC and Canada’s Sun News and CBC.

Darling has been interviewed hundreds of times on talk radio shows on topics ranging from Senate procedure to Supreme Court nominations and the repeal of Obamacare.

For four years, he wrote a weekly column for Human Events, giving readers of the newspaper and its popular website the lowdown on action or inaction in Congress. He also has written for news sites such as RedState.com.

Before joining Heritage in 2005, Darling served as counsel to Sen. Mel Martinez (R-Fla.). He previously was general counsel to former Sen. Bob Smith (R-N.H.) and, in that capacity, staffed the Senate Judiciary Committee.

While with Smith, Darling was a chief strategist for legislation allowing commercial airline pilots to carry firearms in flight. In January 2000, he accompanied Smith on a visit to the residence where Cuban refugee Elian Gonzales was staying – and later crafted legislation to grant the boy permanent residency.

Darling was co-chairman of the Conservative Working Group, a weekly legislative strategy meeting of staffers from House and Senate offices. He also was an aide to two other former Republican senators, Paul Coverdell of Georgia and Steve Symms of Idaho.

A 1996 graduate of New England School of Law in Boston, Darling was a partner in a Washington lobbying firm for two years. He grew up in Andover, Mass. He and his wife currently reside with their daughters in Washington, D.C.