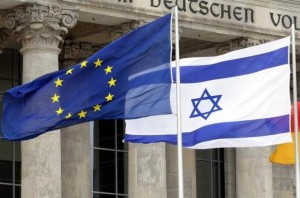 AJC, which has long supported a two-state accord for the Israeli-Palestinian conflict, called a planned European Union notice targeting Israeli organizations operating in eastern Jerusalem, the West Bank and Golan Heights a punitive action that will harm, not advance, the peace process.

“It is not Israel that has a totally divided polity, with the two sides, the Palestinian Authority and Hamas, designated by the EU as a terrorist group, barely on speaking terms.

“And, when the EU refers to the Golan Heights, does Brussels know something about a peace partner in Damascus today that the rest of us may have missed, amidst the widespread carnage there that has resulted in more than 100,000 fatalities to date?
“The key to achieving a two-state solution — which, again, we wholeheartedly support — is by encouraging direct Israeli-Palestinian negotiations, not taking steps now to penalize one party, in this case Israel, while emboldening the other.
“As long-time friends of Europe, where AJC has offices and partnerships, that’s where we truly believe the EU can play a particularly constructive role at this important moment in time.”
New EU guidelines, expected to be published on Friday, will prohibit the 28-member regional body from cooperating with Israeli organizations and providing funding for research grants, scholarships and cultural exchanges, if they are located in easternJerusalem, the West Bank and Golan Heights. The EU also will require Israeli recipients of EU funding to declare that they have no direct or indirect links to those territories.
The guidelines will go into effect on January 1, 2014. AJC is urging the EU to reconsider the publication this Friday of the guidelines, to allow for full EU-Israel consultations, and to give current efforts to revive the peace process, led by U.S. Secretary of State John Kerry, a chance to succeed.
All opinions expressed on USDR are those of the author and not necessarily those of US Daily Review.