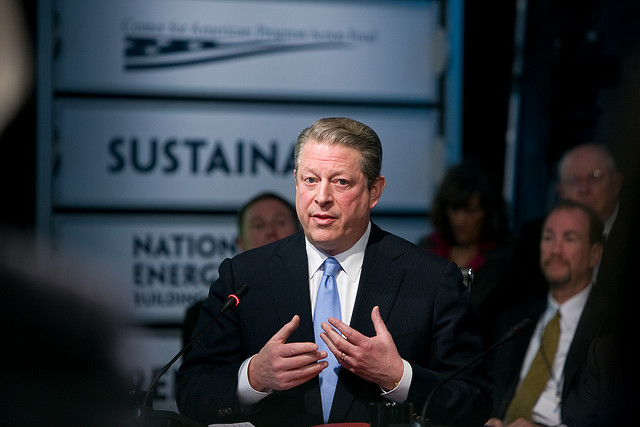 Photo courtesy of The Center for American Progress Action Fund

According to them, the lawsuit and statement simultaneously issued by Al Gore’s celebrity trial lawyer were designed to grab headlines with misleading accusations like “fraud” and “price discount.” The truth is that this is an ordinary commercial dispute, of the type that courts decide all the time.

Al Jazeera provided a news release to correct the record.

In it they explained that Gore-Hyatt group sold Current TV to Al Jazeera in January 2013, and received hundreds of millions of dollars for their channel. In their purchase agreement with Al Jazeera, they promised that Current TV was not in breach of any of its significant contracts.

The group is said to have also promised to indemnify Al Jazeera if, after the sale, Al Jazeera was sued for breach of any of these contracts while Gore and Hyatt ran the channel. To further protect Al Jazeera’s right to indemnification, the sellers agreed to set aside money in an escrow fund to be held and managed by an escrow agent (and not by Al Jazeera, as implied in the Gore-Hyatt lawyer’s statement).

Gore and Hyatt’s assurances of contract compliance turned out to be inaccurate, as mentioned in the release. Current TV is said to have breached its contracts while Gore and Hyatt ran the channel according to various third parties.

Al Jazeera has accordingly demanded indemnification from the sellers for these claims and filed timely notices of claims against the escrow fund with the escrow agent.

Rather than indemnifying Al Jazeera as they were required to do, Gore and Hyatt have issued a preemptive lawsuit.

Some of their public statements, such as suggesting that Al Jazeera has committed “fraud” or is wrongfully holding the escrow funds, are considered by Al Jazeera as “blatantly false” and “potentially misleading.”

Al Jazeera has also explained what it expects from the Gore-Hyatt group.

According to the release, Al Jazeera is not seeking a “discount” from the hundreds of millions of dollars it has already paid to the Gore-Hyatt group.

According to Andrew L. Deutsch, a partner of DLA Piper LLP (US), which represents Al Jazeera, “In the next few weeks, Al Jazeera will respond to the complaint of Al Gore and Joel Hyatt. The response will provide a clear explanation of Al Jazeera’s position and its right to indemnification from escrow funds. Al Jazeera welcomes the opportunity to resolve this commercial dispute before an impartial tribunal.”