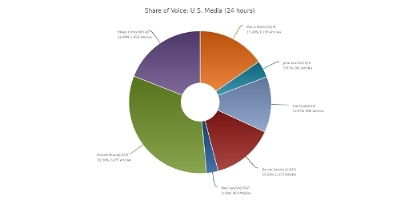 Media analysis by LexisNexis® Newsdesk points to what many Americans likely already know: Donald Trump and Hillary Clinton will probably secure their respective party’s nomination for President of the United States. As for Marco Rubio’s impassioned debate performance… well, despite a bump in Rubio’s media coverage, his attack was probably a little too  late.

Highlights of analysis include the following (download these charts on  Dropbox):

As Super Tuesday approaches, Trump is leading in the polls, in the media and in social conversation. Analysis of media coverage in all 50 states shows Trump dominates 50 percent of mainstream print, broadcast and online media coverage from the past 30  days.

Trump has lost ground to Rubio; media coverage over the last 24 hours shows Trump with 32 percent of share of media voice vs. Rubio’s 16 percent. Ted Cruz, on the other hand, remains the only other viable Republican candidate – according to media coverage, anyway – with approximately 13 percent share of coverage in the last 24  hours.

In Vermont and Colorado, Democrat Bernie Sanders leads with 31 and 29 of coverage, followed by Hillary Clinton with 25 and 25 percent and Trump with a comparatively measly 19 and 24 percent, respectively. This isn’t surprising in a historically blue state likeVermont, but it’s an indication of how Colorado may lean in  November.

And in key battleground states media coverage is anyone’s  game:

In an election season in which the stakes seem higher than ever and anything seems possible, who knows what’s ahead in this election cycle? One thing is certain, however: It’s going to be a bumpy, Trumpy  ride.