America’s 65-and-over population is projected to nearly double over the next three decades, ballooning from 48 million to 88 million by 2050. However, the U.S. Census Bureau projects the U.S. population will age at a slower rate compared with other  countries.

Worldwide, the 65-and-over population will more than double to 1.6 billion by 2050, according to An Aging World: 2015. This new report from the Census Bureau examines the continuing global aging trend and projected growth of the population age 65 and over, with an emphasis on the differences among world  regions.

“The United States was the 48th oldest country out of 228 countries and areas in the world in 2015,” said Wan He, a demographer on population aging research at the Census Bureau. “Baby boomers began reaching age 65 in 2011 and by 2050 the older share of the U.S. population will increase to 22.1 percent. However, the U.S. will fall to 85th because of the more rapid pace of aging in many Asian and Latin American  countries.”

Japan is the current oldest country in the world and will retain that position in  2050.

“However, South Korea, Hong Kong and Taiwan are projected to overtake Germany, Italy and Greece for second, third and fourth place by 2050,” He  said. 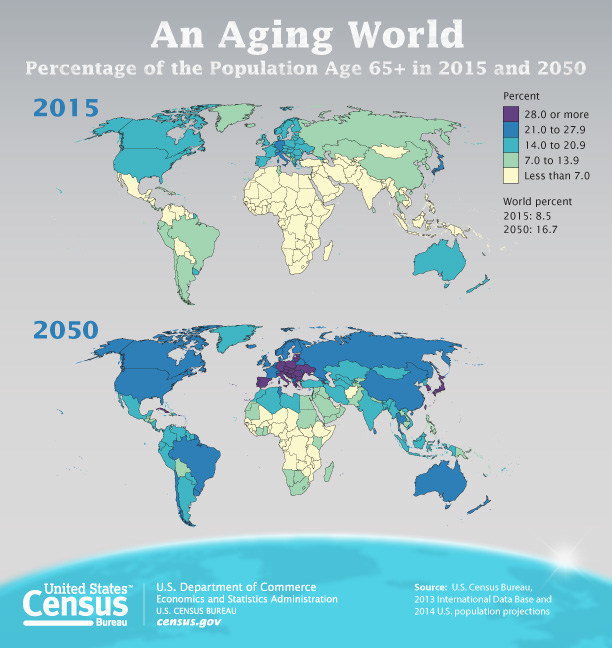 According to the U.S. Census, America’s 65-and-over population is projected to nearly double over the next three decades from 48 million to 88 million by 2050. (PRNewsFoto/U.S. Census Bureau)

Some countries, including China, India, Indonesia, Brazil,Colombia and Cuba, will experience a quadrupling of their oldest-old population, those 80 and over, from 2015 to  2050.

While Europe is still the oldest region today and is projected to remain so by 2050, aging in Asia and Latin America has accelerated in recent decades. Asia is also notable for leading the world in the size of the older population with 341 million people 65 and older. On the other hand, Africa remained young in 2015, where only 3.5 percent of the total population was 65 and  over.

The report contains statistics from the Census Bureau’s International Data Base and other data sources, such as Census Bureau population projections, World Bank, International Labour Organization and the Organisation for Economic Co-Operation and Development. It looks at health and economic characteristics of the older population throughout the world in addition to its growth and demographic  dynamics.

This is the fifth edition in the An Aging World series by the Census Bureau, the first published in 1987. All five editions were commissioned and supported by the Division of Behavioral and Social Research at the National Institute on  Aging.