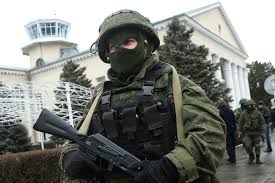 “Since the day in February when President Putin directed Russian forces to unlawfully invade Crimea, Russia has continued to flout the most basic of international laws by abridging the national sovereignty of Ukraine.  Yesterday’s negotiations in Geneva that involved Ukraine, Russia, the U.S. and European Union were a necessary step in trying  to convince Russia to end its aggression toward Ukraine and begin playing a positive role in de-escalating the tension it is creating through the use of irregular forces in Ukraine and the amassing of troops along Ukraine’s eastern border.

“In an overwhelming bipartisan vote last month, the Senate passed economic sanctions against Russia for its unlawful actions and I am open to further sanctions should President Putin not act on the commitments Russia made yesterday in Geneva.”
Today, there was bloodshed in the Ukraine, which might lead to new sanctions.