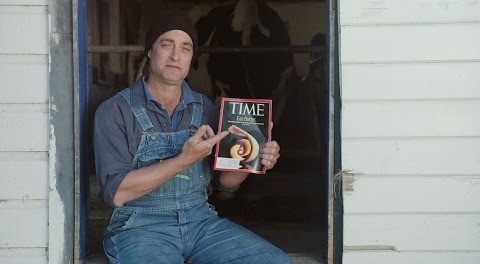 By Organic Valley, Special for  USDR

Organic Valley, the farmer-owned cooperative of more than 1,800 organic family farms, is launching a holiday campaign that defends one of America’s favorite foes of the post-WWII era: delicious, creamy butter. The co-op has an advertising arsenal that includes a video featuring its own farmer-owners, and a live-streaming website where they will be sculpting the faces of our nation’s “War on Butter Heroes” in real time out of Organic Valley’s organic, pasture-raised  butter.

The campaign, created by the Chattanooga-based Humanaut agency, has a long-form video that celebrates the end of the “War on Butter,” the true story of how butter and fats were once blamed for every negative health trend from obesity to heart disease. The “solution” was an increase in butter replacement spreads and sprays made from artificial ingredients and the increase of low-fat and fat-free foods that often upped their carbohydrate quotient (read: sugar) to compensate for flavor. As a result, we have been denying ourselves the extraordinary taste, richness and texture of real butter for  decades.

A spokesperson details the war’s history and presents humorously doctored Egyptian hieroglyphics and Renaissance paintings that highlight our collective love for butter “until, in the 1950s, the party happening inside our pies, pastries and mouths came to an  end.”

Fortunately for our taste buds, the family farmers at Organic Valley were working “underground” to make organic pasture-raised butter even better while this butter battle raged. Organic Valley introduced the first organic cultured butter in 1991, and it has since won 46 awards for its premium butters, which include salted, cultured, pastured and high-fat European-style. Most batches are still slow-churned using vintage churns at the cooperative’s creamery in Chaseburg,  Wisconsin.

“The last five years have seen a sea-change in thinking on saturated fats, including those in dairy food,” says Nina Teicholz, investigative science journalist and author of the bestselling The Big Fat Surprise. “More than a dozen systematic reviews and meta-analyses now reveal that saturated fats have no effect on your risk of dying from heart disease. Also, there’s at least one rigorous new clinical trial showing that full-fat dairy is actually better than low-fat dairy for fighting heart  disease.”

Ultimately, Organic Valley farmers were right all along: Butter is packed with healthy fats and a better balance of omega-3 and omega-6. “Butter has officially won the war on itself,” the ad’s narrator says. “And victory tastes  awesome!”

While the “War on Butter” may be over, Organic Valley is getting busy. To commemorate the occasion, artists will live-sculpt the faces of our nation’s Butter Heroes out of organic butter at TheWarOnButter.com. The effort will kick off with a sculpture of George Siemon, a founding farmer of Organic Valley and “CEIEIO” of the pioneering cooperative. From November 15 to 22, the public can nominate their own Butter Heroes via Twitter and invite friends and family to vote for their favorites. Each day’s winner will be sculpted in real organic  butter.

Teicholz concludes, “We have to rethink our views about all saturated fats, including dairy fats. If they cause no harm, then not only is ‘butter back,’ but so are whole milk and cheese. The natural, full-fat versions of these dairy products are clearly the best for health. And, after all, cows don’t produce skim milk. The more natural and less processed the food, the  better.”

About Organic  Valley
Founded in 1988, Organic Valley is America’s largest independent cooperative of organic farmers and one of the nation’s leading organic brands, representing more than 1,800 farmers in 36 states. Focused on its founding mission of saving family farms through organic farming, Organic Valley produces a variety of organic foods, including organic milk, cheese, butter, spreads, creams, eggs, soy and produce, which are sold in supermarkets, natural-food stores and food cooperatives nationwide. With its regional model, milk is produced, bottled and distributed right in the region where it is farmed to ensure fewer miles from farm to table and to support our local economies. For further information, visit www.organicvalley.coop. Organic Valley is also on Twitter @OrganicValley and Facebook at  www.facebook.com/OrganicValley.

About  Humanaut
Humanaut is a Brand Invention Agency founded in 2013 and based in Chattanooga, Tennessee. Humanaut works with established clients and startups to launch new products, build brands and product experiences from scratch and develop non-traditional marketing campaigns. Humanaut has collaborated with SodaStream, Lyft, Gaia Herbs, EJ Gallo, Nomva, Snap Kitchen, Friends of the Earth, and Organic Valley, and is an equity partner in several startups, including Felt. For more information, visit  Humanaut.is.