M-F at 8 pm CST on http://1070knth.com, hosted by US Daily Review Publisher/Editor in Chief, Kevin Price.
Floyd Brown of WesternJournalism.com was on the Price of Business discussing the recent revelation that Barack Obama was born in Kenya, according to a source that was very close to the president, his own publicist.
Listen: Floyd Brown and Kevin Price discussing the latest revelations on Obama’s birth certificate. 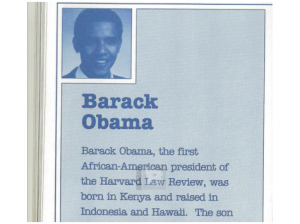 Breitbart News has obtained a promotional booklet produced in 1991 by Barack Obama’s then-literary agency, Acton & Dystel, which touts Obama as “born in Kenya and raised in Indonesia and Hawaii.”

The booklet, which was distributed to “business colleagues” in the publishing industry, includes a brief biography of Obama among the biographies of eighty-nine other authors represented by Acton & Dystel. It also promotes Obama’s anticipated first book, Journeys in Black and White — which Obama abandoned, later publishing Dreams from My Father instead:

“Barack Obama, the first African-American president of the Harvard Law Review, was born in Kenya and raised in Indonesia and Hawaii. The son of an American…(read more)