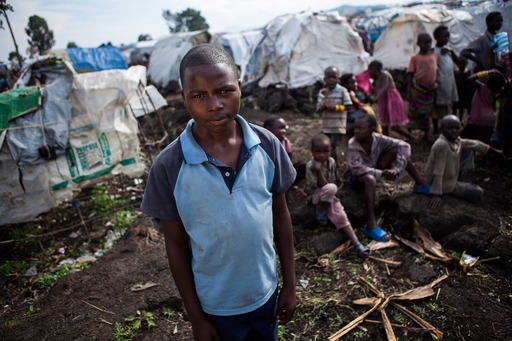 More than a third (38 percent) of children interviewed for No One To Turn To said they were scared all the time or on a daily basis and 36 percent had experienced or witnessed violence first hand, often extreme and graphic in nature.

“It’s no surprise that this conflict is affecting children, but even we were shocked at the extent we found when we looked into it. It is heart breaking,” says Frances Charles, Advocacy Manager for World Vision in eastern DRC.

“The atrocities children spoke of – seeing their parents’ killed, fleeing their home, being attacked – are committed so frequently that many regard it as a normal part of daily life,” says Charles.

The continual violence, and their exposure to it, puts children at risk of permanent physical and psychological damage, the report warns.

“There’s a very real risk that children living in other conflict situations around the world, such as Syria and Central African Republic, are suffering in similar ways. Every time a bullet is fired, every time a new peak in the conflict hits, we know that these children are put at further risk of suffering long-term damage,” says Charles.

“They usually witness unspeakable horrors and have no home or family to turn to. We know how vital it is that they receive support, protection and loving, caring relationships now so to prevent permanent damage as they grow.”

More than 1.5 million people have fled their homes in eastern DRC, and almost every child World Vision interviewed for the report (96 percent) has been forced from their home, many more than once. But the organization believes another reality is possible.

“The situation is dire, but not hopeless,” says Charles. “Peace is the top priority, and 2014 presents one of the best chances for this that we’ve seen for a long time.”

The Congolese government and 10 regional African governments are now developing a plan of implementation for the Peace, Security and Cooperation Framework, an agreement signed last year that aims to bring an end to foreign backing of armed groups, support an overhaul of Congolese security and government services and improve relations between countries in the region.

“In the meantime, children need to be protected – by families or other caring adults, with the support of local organizations and ultimately the government. This report serves as a reminder for how important this is now more than ever.”