In spite of the fact that China continues to claim that is is becoming more free. Its unique history of oppression continues to show its ugly head.

“I suppose it should be regarded as a badge of honor to be banned for making art about political freedom,” said Simon Raab (www.simonraabgallery.com) upon hearing that his work had been banned in China. “I am disappointed that the Beijing show was canceled but also fascinated by the irony. Why did the Communist Party that manages the lives of 1.3 billion people and the world’s largest standing army, find my work threatening? Perhaps all artists should be gratified that their work — popular or not — has the power to threaten the status quo. The success of China’s economic capitalism is not matched by their capitalism of ideas.” 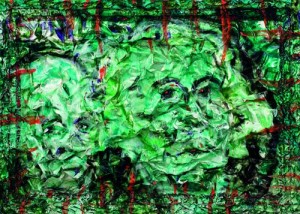 News of the banning of Raab’s work in China was made public in the Suddeutsche Zeitung, Feuilleton, April, 2012 (English translation). The article presents an economic argument for the banning of numerous art pieces and the arrest of shipping executives. It would be reasonable to suspect that the censorship of art coming into and leaving China is the primary motivation for the ban. One Chinese official remarked: “Raab’s art is not welcome in China.”

Simon Raab’s banned art included an abstract piece, entitled “Tibetan Flags” from a series called “From Behind These Bars”.Perhaps it was naive of Raab to imagine that a work of art, which depicts the immolation of Tibetan culture and the imprisonment of political opposition, would be accepted in Beijing. The Michael Schultz Gallery (www.galerie-schultz.de) fromBerlin, which attempted to show Raab’s art in China, claims no political motivation and was dismayed by the government’s response. This nonchalance speaks to how we take these freedoms of expression for granted.

Prior to the Beijing show, Raab had a show in Seoul, Korea, also with the Michael Schultz Gallery. Raab works in a unique medium, he coined and patented as Parleau, whose etymology is French for ‘through the water.’ Multiple layers of colored polymers are applied to stainless steel and aluminum and then “crushed” or sculpted to give the appearance of an image just under the surface of water. The art is presented as either a wall-mounted painting with embedded frames, or as a freestanding volumetric sculpture. Raab’s work is characterized by brilliant colors, figurative abstractions, and most often conveys some underlying philosophical message.

Raab has enjoyed several successful years of exhibitions in numerous European capitals and is represented by the Peter Zimmermann Gallery (www.galerie-zimmermann.de) in Mannheim, Germany. Raab was formerly a scientist and engineer and brings his rich technical training in materials to bear on his art. He credits the secret processes he has developed in Parleau to his scientific background. “It is a myth that the creative impulses and process in the sciences are different than those in the arts. They have many similarities, in that they are emotional, inspired, magical, technical, and are often born of frustration,” explained Raab.

Thomas Steinbeck, the acclaimed writer son of John Steinbeck (whose own works were also once banned) is a friend of Raab’s and commented on the banning: (The Art of the Plausibly Absurd).

“In this regard Chinese officialdom never tires of quixotic intellectual self-humiliation when they attempt to influence what their people can see, or hear, or read, and what foreign influences should be excluded from all public exposure. There is, however, a basic problem with this long held premise, and that resides in the fact that it never really works. Art will always find ways and means to channel cultural reflections and public opinion in any way it can. That is what art is really meant to do. The artist carries the critical eye for that particular time and place, and passes it on. One would hope that others are witnessing and recording as well. But sadly it makes little difference since the Chinese government has the implied right to inhibit popular consumption.

… With remarkable dedication towards the public good, all Raab’s artwork, and almost everybody having something remotely to do with its importation, was taken into custody. The absurdity of it all is pure precision. To arrest art because it discusses incarceration, is to generate and increase interest from an audience that might never have known anything of the work except for the official Chinese response. Patent absurdity, like automobile accidents, always draws spectators. Raab’s remarkable paintings, as well as his subject matter, have now both served “hard time,” which will probably broaden the artist’s audience considerably. What provenance! This is what makes art history so entertaining.

My father once observed that every time some morally offended community decided to ban, or burn his books, the sales always went way up everywhere else. To be banned in Boston was great for business. But to be banned in Fargo or Freemont isn’t like being considered anathema to billions of Chinese. That takes real talent.”

Sponsor: Want the news uncensored? Check out the Price of Business, M-F at 8 pm CST.