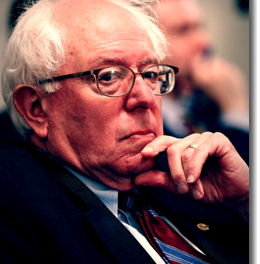 By  Center for Immigration Studies, Special for  USDR

A new Center for Immigration Studies report analyzes Democratic presidential candidate Bernie Sanders’ dramatic shift away from his former stance as a passionate defender of American workers. In seeking to increase his support among Latino voters in the contest against Hillary Clinton, Sanders no longer denounces proposals for massive guest worker programs, which he once described in Senate debates as a strategy by greedy employers to flood labor markets and drive down wages for American  workers.

Jerry Kammer, a senior research fellow with the Center and author of the report, writes: “Sanders no longer demands that immigration legislation protect American workers from the risks of loose labor markets crowded with imported competition. The immigration debate no longer rings with the Sanders rhetoric of 2007, when he attacked the guest worker plan by condemning it as a plan conceived in corporate greed and employers’ insatiable hunger for cheap  labor.”

Read the entire report at:  http://www.cis.org/Immigration-Policy-and-the-Politics-of-Bernie-Sanders

Sanders’ newfound opposition to immigration enforcement reflects the Democratic Party’s steady shift to the left on immigration policy, away from concerns for American workers and the poor, and towards the corporate elite and low-wage workers from abroad that it craves. The patriotic concerns Sanders once voiced for his fellow Americans have been replaced by a “bidding war for the votes of those who seek full rights for the  undocumented.”

Kammer writes that the immigration debate among Democrats has moved along an axis. At one end was civil rights pioneerBarbara Jordan, who in the 1990s called for stricter enforcement and lower levels of immigration, to protect the most vulnerable members of our society. At the other end is confrontational pro-amnesty activist Arturo Carmona, whom Sanders hired last fall to curry favor among Latino  activists.

The central theme of the Bernie Sanders campaign for president is that the United States needs a revolution to transform our society. It is ironic that in his effort to win the Democratic nomination Sanders has launched what amounts to a counter-revolution against the principles of immigration restraint that he once espoused as necessary to the preservation of a just and equitable American  society.