Andres Santo Domingo, the presumptive heir to a massive family fortune and the husband of prominent socialite and Vogue Editor Lauren Santo Domingo, pleaded guilty today to a hit and run charge in a New York courtroom.  Despite a previous denial, Santo Domingo has now admitted to hitting Ryan Coutu last March and fleeing the scene in his Mercedes Benz. Santo Domingo was facing a potential felony conviction carrying up to 4 years in state prison before his plea bargain was finalized with the Manhattan District Attorney’s Office. 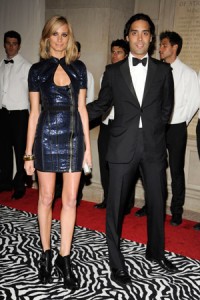 Domingo and his wife.

Coutu required arm surgery after he was thrown to the ground while crossing a midtown street.  As a result of being struck, he suffered painful nerve damage and multiple spinal injuries.  Coutu is still undergoing treatment and rehabilitation for the damage caused by Santo Domingo.

Coutu’s attorney, Herb Subin, issued the following statement on behalf of his client:  “No one in this country is above the law – not even a ‘billion-heir’ poster-child for the one percent club.  My client is relieved that Santo Domingo will now be held accountable for his actions.  If you hit someone with your car – you stop.  If you callously drive away instead, you are sub-human.  You should lose your license and go to jail.”

Santo Domingo has continued to make the rounds on the elite Manhattan party circuit – even recently co-hosting a benefit for “The Fortune Society,” a charity for ex-cons.  He has yet to offer an apology to his victim.  Even though Santo Domingo has avoided a drawn out criminal trial, his plea deal includes a license suspension, a dangerous driver course and community service.