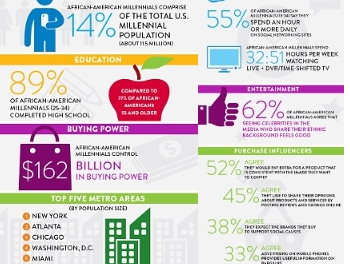 By Nielsen, Special for  USDR

Black Millennials are 11.5 million strong and leading a viral vanguard that is driving African-Americans’ innovative use of mobile technology and closing the digital divide. Nielsen highlights this group in a new report called “Young, Connected and Black: African-American Millennials Are Driving Social Change and Leading Digital Advancement.” With $162 billion in buying power and undisputed cultural influence, Black Millennials are using their power to successfully raise awareness of issues facing the Black community and influence decisions shaping our world. Media and brands are taking notice, creating campaigns and content that target this increasingly influential demographic with greater ad spends and more diverse  programming.

The sixth in Nielsen’s Diverse Intelligence Series focused on Black consumers, “Young, Connected and Black” paints a picture of a Black diaspora that is tech-savvy; socially and civically engaged; growing in population (46.3 million or 14% of the U.S. population) and buying power (nearly $1.2 trillion in 2015); and optimistic about the  future.

“We have entered a new era whereby technology has become a great equalizer,” said Cheryl Grace (née Pearson-McNeil), Senior Vice President, U.S. Strategic Community Alliances and Consumer Engagement. “Black Millennials are leading the way in their use of technology to impact change and get their voices  heard.”

The 83.1 million U.S. Millennials are considered a key voting bloc this November. Black Millennials represent 14% of all Millennials and 25% of the total Black population. The top five markets for Black Millennials (by population) are New York, Atlanta, Chicago, DC andSouth Florida (Miami/Ft. Lauderdale). Weeks before the 2016 presidential race, the power of the Black electorate is a particular point of interest given the records set in 2012 when, bolstered by its Millennial population, African-Americans had the highest rate of voter registration and voter turnout of any demographic group in the  U.S.

“African-American Millennials are blazing trails to the center of the debate over matters that are paramount to their future success and safety—all as their influence over mainstream consumers grows,” said Deborah Gray-Young, Managing Partner, D. Gray-Young Inc., a multicultural marketing consulting firm and Nielsen External Advisory Council member. “Nielsen continues to be the definitive source of independent third-party insights on consumers of color. This annual report is an essential tool for organizations looking to develop a deeper contextual understanding of the influence and economic power of Black  consumers.”

The 2016 report delves into the spending and viewing habits of African-Americans overall and credits a voracious appetite for television content with the dramatic increase in diverse television programming. Between 2011 and 2015, broadcast network TV ad spend focused on Black audiences (defined as ad dollars placed on programming with greater than 50% Black viewers) increased by 255%. The Top 10 TV shows among Black Millennials 18–24 and Blacks 35+ all had predominately Black casts or lead actors who are key to the storyline (e.g. “Empire,” “How to Get Away With Murder,” and “The Walking  Dead”).

Some other key highlights from the  report:

African-Americans are Closing the Digital  Divide

About  Nielsen
Nielsen Holdings plc (NYSE: NLSN) is a global performance management company that provides a comprehensive understanding of what consumers Watch and Buy. Nielsen’s Watch segment provides media and advertising clients with Total Audience measurement services across all devices where content—video, audio and text—is consumed. The Buy segment offers consumer packaged goods manufacturers and retailers the industry’s only global view of retail performance measurement. By integrating information from its Watch and Buy segments and other data sources, Nielsen provides its clients with both world-class measurement as well as analytics that help improve performance. Nielsen, an S&P 500 company, has operations in over 100 countries that cover more than 90% of the world’s population. For more information, visit  www.nielsen.com.