Former Illinois governor Rod Blagojevich was sentenced to 14 years in federal prison Wednesday for 18 felony convictions stemming from trying to sell the U.S. Senate seat once occupied by Barack Obama, shaking people down in exchange for campaign contributions and lying to federal agents. 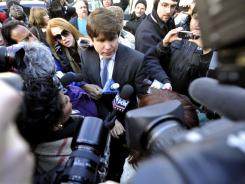 Blagojevich told the court that he made “terrible mistakes” and was “unbelievably sorry” for his crimes.

“I am responsible,” Blagojevich said, apologizing for his actions and his earlier assertions that he was unjustly targeted by prosecutors.

His emotional statement was a dramatic departure from his insistence on his innocence since his arrest three years ago.

At a brief press conference after sentencing Blagojevich told reporters that this was a time to be strong, to fight adversity and to head home to his children and explain his sentence. He has 90 days to report to prison.

U.S. Attorney Patrick Fitzgerald said at a news conference that the sentence “sends a strong message that the public has had enough and judges have had enough. This needs stop.”

U.S. District Judge James Zagel gave Blagojevich some credit for taking responsibility for his actions but said that didn’t mitigate his crimes. Zagel also said Blagojevich did some good things for people as governor, but was more concerned about using his powers for himself.

“When it is the governor who goes bad, the fabric of Illinois is torn and disfigured and not easily repaired,” Zagel said.

As the judge announced the sentence, which includes a $20,000 fine, Blagojevich hunched forward and his face appeared frozen. Minutes later, his wife, Patti Blagojevich, stood up and fell into her husband’s arms. He pulled back… (read more)