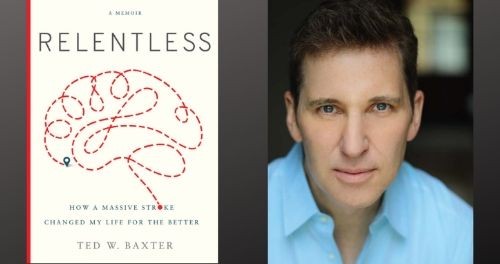 Each year, about 795,000 Americans suffer a stroke, and someone has a stroke every 40 seconds. In 2005, Ted W. Baxter was one of them. It was April 21, and he had no idea it was coming, except that his leg hurt. He was in peak condition, a gym-obsessed 41-year old; an extremely ambitious global finance executive who lived, breathed, and dreamed work. And traveled — constantly. He had just returned from a business trip and he and his then-wife, Kelly, were sitting down to an episode of The Apprentice when the stroke hit. “Suddenly I couldn’t get my mouth to form any words,” he writes of that fateful night. Thus begins a remarkable, harrowing journey to regain the life he nearly loses that night. It’s all told in his memoir, Relentless: How a Massive Stroke Changed My Life for the Better (Greenleaf Book Group).

Relentless is the true story of someone whose Type A personality actually helped him save his own life. As he describes himself, he was likely impossible to be with, at times — he put work first, fitness second, underachieved in the relationships department and overachieved in the business arena. But in the course of seconds he went from being profoundly self-assured to being utterly terrified. The massive ischemic stroke he suffered robbed him of his speech, his mobility, and his coordination. Yet on those weeks after his stroke, greatly diminished, a dubious future ahead of him, he resolves to summon his own ambition to better use — and so he does.

The narrative of this book is interestingly multidimensional: not only does Baxter tell his story, so do a whole host of supporting characters (and here supporting is a verb). His ex-wife — who apparently postponed her desire for a divorce to help nurse him back to health — describes watching the paramedics working on him, the terror that his plummeting blood pressure wouldn’t stabilize (it did); and the very modern frustration of not being able to access his Blackberry in the hospital so she can call his bosses: she couldn’t ask him for his password since he couldn’t talk. She conveys a sudden Twilight Zone realization that he would never be the same, and this sense of human frailty suddenly becomes very real, and very universal.

Others weigh in — brothers, siblings, a speech pathologist. Each has their own take on how Baxter is doing, the progress he is making, or the will he has. It’s a clever device for breaking out of the usual first-person format of a memoir, and also reminding us that at the center of this story is a man who intent on taking his recovery into his own hands, but he needs a whole lot of help. This is a book about recovery — indeed, it’s about what are the best and more current practices when it comes to recovering from a stroke and its aftermath, including a profound and tragic case of aphasia. And one of those practices is to lean on the people who love you, because you’re going to need them. Another: ask a whole lot of questions, and never stop asking. And yet another: don’t give up.

The usefulness of this book is certainly in the information it presents about stroke and aphasia and how to recover. This very personal narrative is layered with great tips, including plenty of science and fascinating explanations. The neurologist and the speech language pathologist who introduce Baxter’s story set his condition in context, discussing in detail how the brain works, how stroke happens, the history of how we’ve dealt with strokes, and where we’re headed. They talk about wishing they could plant cells in his brain to regenerate the damaged sections — as highly disciplined as Baxter he, he would be an ideal candidate for the procedure. They talk about recombinant tissue plasminogen activator (rt-PA) — now administered to people who have just had a stroke and which can reverses its effects. Baxter didn’t have rt-PA, and his brain was badly damaged. Yet, as they write, he was determined to deal with aphasia, determine to get his brain back, and at the time of the writing, that was already happening. It still continues today.

Baxter is no longer a financial maven; he volunteers and works as a stroke and aphasia advocate, encouraging those who have suffered from strokes and aphasia to push past discouragement and unknowing to a place of self-determination and courage. He still grapples with aphasia — and likely will the rest of his life. But it doesn’t stop him from wanting to be out in the world, an active participant who makes no apologies but is more than willing to explain why his is the way he is. And every day, every podcast, every interview, he is improving. He’s become far more than one single stroke and aphasia victim whose life changed in an instant. He’s a symbol of survival, and an inspiration to not only stroke survivors, but their loves ones as well. The human spirit is alive and well in Relentless. Just as it enabled Ted W. Baxter to chart a wholly new path for himself that feels more human, more loving, and more engaged with the world, it could do so for someone you know —or yourself — as well.