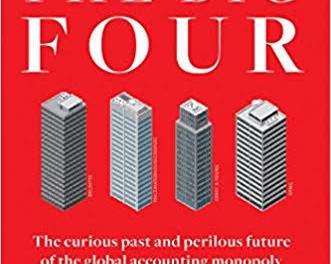 The giant accounting and auditing firms — Deloitte, PricewaterhouseCoopers, Ernst & Young, and KPMG, otherwise known as the Big Four, handle the bulk of financial services for a vast majority of businesses. They’re also the stars of this insightful, beautifully researched, and quick-reading book by accounting experts Stuart Kells and Ian D. Gow, The Big Four: The Curious Past and Perilous Future of the Global Accounting Monopoly (Berrett-Koehler, August, 2018). Or you might say they’re the  villains.

A lot of mystery surrounds these firms. To start, even calling them firms is a bit of a misnomer. They’re more like enormous and interconnected networks working under central umbrellas. Most recently they were the Big Five, but the Enron scandal took down Arthur Andersen. Before that, they were the Big Six and the Big Eight, and then companies began to merge. As they did, they grew exponentially in bulk, size, and potential problems, turning into a kind of organizational quartet of Incredible  Hulks.

But as the authors show, in the age of “too big to fail” these unwieldy behemoths have extremely weak foundations, and failure may be inevitable. For one, none are very heavily capitalized, and there’s neither the room or the mechanism to institute the kind of substantial, across the board, let’s-fix-this improvements as one sees in some traditional corporations. But they are just as ambitious, audacious, and sometimes nearsighted, as Kells and Gow point out. The Big Four’s bold forays into the great frontier of Chinese business have gotten them into some serious hot water, and digitization as well other hallmarks of this transparent, speeded up, tech-driven era are revealing that in some ways, these firms seem more like  dinosaurs.

By looking at the past and bringing us into the future, tracing the lineage from infancy to maturity to adulthood to what they call the “twilight years,” the authors reveal what may befall Accountasaurus Rex. They recall the rise and fall of the Medici Bank for comparison, and show how our very relationship to money and accounting over time has led to serious flaws in our institutions. While the Big Four were created to be capitalism’s watchdogs, they seemed to have forgotten their primary role by the time we got to the 21st century. Or, rather, the partners at the very top revised that role. A client bringing in millions in fees is well worth staying tight-lipped about any red flags the junior staff may have found. But when the lid blew off Lehman Brothers, the firms’ image as the blue-suited experts minding the store blew apart as  well.

Sloppiness, overlooked and far-reaching mistakes, duplicity, intentionally concealing and dealing — that’s the image following these pillars of money now, and as the authors note, it should make everyone nervous. When the guardians of finance are corrupted by the prospect of immense wealth, what’s left? Gow and Kells delineate the possibilities, none of which include the status quo. With regulators closing in with various scenarios — from shuttering the Big Four completely or forcibly breaking them up to shifting their role to auditing only — it seems clear that we are indeed witnessing the twilight of the financial gods. If only they didn’t act like such  devils.