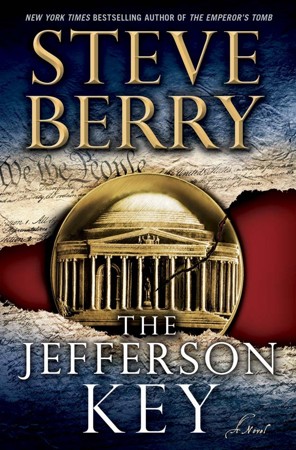 The Jefferson Key by Steve Berry is another “must read.” I’m sure I’ll review a book soon that I don’t care for, but it’s not this book, and it’s not this day.

“Cotton Malone is known for his overseas exploits. A former-Justice Department operative, who can’t stay out of trouble, he’s found adventures in all parts of Europe (The Templar Legacy, The Paris Vendetta), Central Asia (The Venetian Betrayal), Antarctica (The Charlemagne Pursuit), the Middle East (The Alexandria Link), and China (The Emperor’s Tomb). But he’s never had an American adventure. Until now,” says Steve Berry.

Now imagine, if you will, that George Washington, the father of our country, gave four families “Letters of Marque and Reprisal” in perpetuity. Now that to 2011, and those families are still pirates, operating on a global level.

This is a Suspense/Historical Mystery, with a healthy dose of action, that will keep you on the edge of your seat. Mr. Berry did his research, and wove a fascinating tale around history to give Cotton Malone, Berry’s main character, an adventure in his homeland he would never forget.

When asked to describe The Jefferson Key in as few words as possible, Mr. Berry replied, “Four United States presidents have been assassinated–in 1865, 1881, 1901, and 1963–each murder seemingly unrelated. But what if those presidents were all killed for the same reason–a clause in the United States Constitution, contained within Article 1, Section 8–that would shock Americans.”

So combine the clandestine world of spies, with piracy, corrupt government officials and a power these pirates are willing to kill for, and if you’ve got The Jefferson Key that will keep you up until the wee hours of the morning as you read, “just one more chapter.

I will be interviewing Mr. Berry on my radio show, Turning the Tide with Candace Salima on October 12th at 2:00 p.m. MDT. Tune in you’d like to learn more about Mr. Berry or The Jefferson Key.