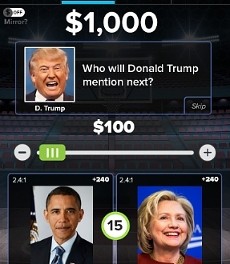 By Boom Fantasy, Special for  USDR

Trump vs. Cruz. Bush vs. irrelevance. Rubio vs. his insatiable thirst for water. If you thought the last few debates were fun, brace yourself. Saturday night will be like no other, as staunch conservatives and bleeding-heart liberals alike can be a part of the ABC News Republican debate by predicting what will happen next on Boom Fantasy, the live fantasy sports  leader.

Who will Donald Trump go after next? Which will be mentioned first: Ted Cruz’s Canadian citizenship or his questionable Iowa tactics? Who will utter the words “Hillary Clinton” next? It’s all in play Saturday night at Boom  Fantasy.

Saturday’s Republican debate, which begins at 8 pm ET, will be the first ever non-sports event for the Stanford startup. Taking place just three days before the pivotal New Hampshire Primary, the debate is sure to feature plenty of fireworks as Trump, Cruz, and Marco Rubio jostle to take control of the  race.

“Watching Trump and Cruz combat each other seems like more of a sporting event than the Nets-76ers game on Saturday evening,” said Stephen A. Murphy, co-founder and CEO of Boom Fantasy. “Our live fantasy format adds fun and excitement to all types of events, not just athletic  contests.”

Twenty-five thousand players have already made nearly two million predictions at Boom Fantasy, but Saturday’s debate will provide a chance for a different demographic to watch, predict, and win. Saturday’s contests will be free to play, with over $200 awarded in both cash prizes and, for first-place finishers, contributions to their choice of  candidate.

“We couldn’t resist this unique opportunity to bring our platform to a new group of people,” said Assaf Einat, co-founder and CTO of Boom Fantasy. “With Boom Fantasy, Saturday’s debate will be enjoyable even if Rand Paul somehow makes it back on  stage.”

After Saturday’s foray into politics, it’s back to business-as-usual on Sunday, when the Broncos face the Panthers at 6:30 pm ET on CBS. Boom Fantasy will be holding a variety of live tournaments for the big game, with thousands of dollars in prizes on the  line.

Boom Fantasy can be played at www.boomfantasy.com, and is available in the App Store and on  Android.

The in-game fantasy sports leader, Boom Fantasy has run over 10,000 tournaments and its players have made nearly two million predictions. Founded in Palo Alto and now headquartered in New York City, the company has raised $1.4 million from top Silicon Valley investors. The team has previously worked for MGM Resorts International, Google, the Israeli Air Force, High 5 Games, Nike, and the  NBA.