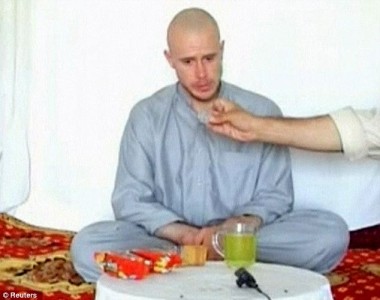 When Barack Obama negotiated with the terrorist organization, The Tablian, he didn’t notify Congress first, as he is required to do. In addition, the reactions of those who serve with Bowe Bergdahl are very telling. News sites all over the world reported many things but there are a few salient facts that we can rely on:

First: PFC Bowe Bergdahl had grown quite disillusioned with America’s War on Terror and decided that America was in the wrong. He was quite vocal to his platoonmates and commanders how he felt about America. Emails reported by CBS News, quoting Rolling Stones magazine, indicate his great shame at being an American in a report on June 8th of 2012.

Second: When Bergdahl left his base, he left everything behind, inquired as to where he could find The Taliban and promptly hiked to join the enemy. Through various attempted rescue missions, six good men were killed. Bergdahl, on the other hand, had willfully walked into the hands of the enemy. I don’t imagine The Taliban treated him well initially, but the fact that Bowe Bergdahl lived five years in the hands of The Taliban shows very clearly that he was no ordinary prisoner. As The Tablian is wont to do, they normally torture their captives and then brutally behead them, but not Bowe Bergdahl. Why?

Third: On The Kelly File (FoxNews) on June 6th of 2014, six of Bergdahl’s platoonmates were interviewed. They made it very clear that they view Bergdahl as a deserter.

Six soldiers who served in the same platoon as Sgt. Bowe Bergdahl in Afghanistan expressed anger, sadness and outrage over what they said unequivocally was Bergdahl’s willful desertion five years ago, with one telling Fox News’ Megyn Kelly, “we would all die for him and he left.”

When asked by Kelly on “The Kelly File” if they thought Bergdahl had deserted their platoon, all six men raised their hands. They also all agreed Bergdahl should be court-martialed and tried for desertion, saying this is not about politics. Read More

Fourth: FoxNews reported on June 6th of 2014 that Bergdahl converted to Islam and declared Jihad against America during his “captivity.” U.S. Army Sgt. Bowe Bergdahl at one point during his captivity converted to Islam, fraternized openly with his captors and declared himself a “mujahid,” or warrior for Islam, according to secret documents prepared on the basis of a purported eyewitness account and obtained by Fox News. Read More

James Rosen, the reporter for the above story, makes it clear that Bergdahl was alternately a captive and a free man, even armed at times. Not only is Bergdahl a deserter, it is clear he aided and abetted the enemy as well throughout the course of his “captivity”.

Fifth: Barack Obama chose to release five of the most dangerous men at Guantanamo Bay (Gitmo) in exchange for Bowe Berdahl, a deserter. These men will undoubtedly be back killing Americans in no time at all. Although the president assured America that they were released to Qatar and would be under surveillance, it quickly became clear that these criminals would be allowed a great deal of freedom to return to their war against freedom in their own nation and against America.

Sixth: Although Bergdahl has been free for well over a week now, he has yet to call his parents. Jim Miklaszewski of NBC News is reporting that Bergdahl is psychologically and emotionally unready to return to America. Other reports say that he is refusing to speak English, only speaking Arabic. Reading into that, it’s clear that they don’t know what to do with Bergdahl. It’s clear he’s not fitting the “party line” of what occurred in Afghanistan, and they are keeping him under wraps until he’s thinking clearly again.

It boils down to this, Special Operations from every branch of our military are livid over the “light” treatment Bergdahl is receiving from the Obama Administration and the media, as are those who served with him in their platoon. Equally, they are livid over the release of the Gitmo prisoners because those men have collectively murdered thousands of people. In the meantime, John Kerry, our Secretary of State, defends negotiating with terrorists as the normal negotiations that go on at the winding down of a war, as does Susan Rice. Both the Pentagon and Intelligence agencies are investigating what went on Afghanistan after Bergdahl deserted his military base. What isn’t clear is if they are going to listen to the men who served with him, read the emails he sent, or read the reports of what really went on over there. America awaits the answers. Will Bowe Bergdahl be charged with desertion and treason, or will he be allowed to hold onto the promotions he received while in “captivity” as well as the backpay?

Candace E. Salima is an author, columnist, public speaker and political activist. A frequent radio guest on shows around the nation, she is valued for her viewpoint on a variety of subjects, particularly politics. Follow Candace on Facebook, add Candace Salima to your Circles Google+. Learn more about her at www.candacesalima.com.