By the Price of Business Show. Radio Partner of US Daily Review. 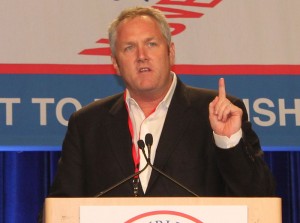 Andrew Breitbart is a media empire in his own right.  With his highly circulated Breitbart.com, BigGovernment.com, BigJournalism.com website and others, he leaves an enormous impact on the political and cultural landscape.  Hated (and sometimes, feared) by the left, Breitbart does not shy from controversy and is willing to shed the light where other journalists will not go.  Recently Breitbart was a guest on the Price of Business radio show, hosted by US Daily Review Publisher and Editor in Chief, Kevin Price.  Both Breitbart and Price will speaking at the Texas Young Republicans state convention in February and they both shared their thoughts on what they would be emphasizing.  They agreed on many things and concluded that the political wars cannot be won unless there is a serious paradigm shift in the culture.  The interview is in two parts: