The remarkable nature of Japan’s response to the earthquake and tsunami that struck just over a year ago made a deep impression on people the world over, as have the more recent pictures of the clean-up and efforts to regenerate the affected areas.

For businesses, however, the disaster served as a reminder that risk management goes beyond regular day-to-day business. In a new survey by AT&T, results show that the business community in Japan is increasingly planning for unexpected events, seismic or not, that could disrupt or even shut down their operations. And as they enter the new financial year the survey shows that IT executives view business continuity planning and cloud computing investment as major priorities. 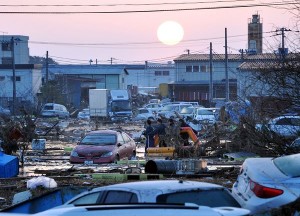 The survey shows that 72% of companies in Japan surveyed are calling business continuity a priority in 2012 IT planning. Such preparedness is not just for theoretical threats – more than half (52%) of the companies surveyed said they have had to activate their own business continuity plans to deal with such diverse threats as IT failure, power outage at facilities and a “virtual event” such as a security breach.

Technological development and growing IT budgets have enabled businesses in Japan to explore new ways to maintain critical domestic and international operations in the face of either natural or manmade disasters. Seventy-seven percent of executives surveyed said that IT budgets in new financial year are remaining about the same or are higher than in the past two years, while 36% are planning to invest in cloud computing in 2012, which allows companies to store data offsite and access it anywhere in the world. Security solutions (27%) and virtualization (25%) are another two new technologies companies are thinking about investing in during the coming financial year.

Mobility and wireless networks also carry weight in 2012 IT planning, but the security implications of mobile devices and social networking are a pressing concern for IT executives.

“Creating risk management strategies is not simply responding to threats. We are glad to see that Japanese companies understand the importance of business continuity planning and cloud computing investment in 2012 IT planning. Casting a more robust, more holistic risk management approach should be the new thinking for all Japanese companies,” said Manabu Oka, President of AT&T Japan.

Sponsored: Got insurance, get Celtic! Visit this site for a free quote today!