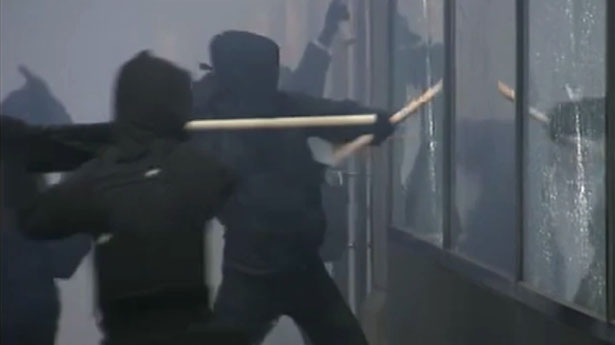 Yesterday, the Occupy Wall Street folks made their way out of their parents’ basements, took the sack lunches their mothers had made, laced up their Nikes and headed into the heart of downtown. They worked themselves into a frenzy, and in Seattle at least, they vandalized and destroyed business after business, putting Washingtonians out of work for the foreseeable future while repairs are made, insurance claims are filed, and business owners struggle to figure out how to keep their doors open.

In New York, they walked down the street protesting…what I’m not sure. They held signs that claimed they were the 99%, but I have to be honest, they don’t look like any 99% I’ve ever seen. White powder was sent in envelopes to banks and businesses claiming they weren’t in charge, “the people” were.

Elsewhere, other anarchists with loose ties to OWS plotted to blow up a bridge. At the same time, others in San Francisco tried with all their little might to blow up the Golden Gate Bridge in San Francisco, but just couldn’t pull it off.

Meanwhile, the SEIU and other unions stepped up to fund the OWS protests. Barack Obama and the Democrats embraced the move last fall. And this is what its come too. Thugs hiding their heads and faces with hoodies, attacking businesses with owners who are working hard every day to make a living and keep people employed.

Although I was a child in the 60’s and 70’s, I recall the violence which emerged from the hippy movement. I remember Bill Ayers and his Weather Underground blowing things up. I remember even others kidnapping, murdering, etc., all in the name of some movement I have yet to understand. But it is eerily reminiscent of the Occupy Wall Street thugs. I leave you to draw your own conclusions on the comparison.

In the meantime, what happened to the tea party. Well, as I’ve mentioned in a previous article, we left our protests and went to work finding viable candidates, campaigning, educating, and networking in order to remind people of why America was great. We took to the airwaves of both radio and television. We began writing for print and online media. We blogged. We became familiar faces to our elected officials. And in the meantime, we worked at jobs and supported our families.

The difference between the two movements is stark. One loves America and is fighting to preserve the free enterprise system and the Republic the framers of the U.S. Constitution gave us. The other simply destroys everything in their path, gleefully rubbing their hands at the mayhem and terror they are wreaking.

So how is America responding? I don’t know. But I believe the referendum on these two movements will be made November 6, 2012 when we cast our vote. Vote to preserve America by casting your ballot for Mitt Romney and his “Believe in America.” Or vote for the fundamental change of America, in the form of Marxism, by voting for Barack Obama and his “Forward” movement.

The choice is yours, what will you choose?