Editor’s Note: It is very uncommon for foreign currency to dominate the conversations of Americans.  However, it has become next to impossible to turn on the TV, pick up a newspaper, or tune in to a radio station without there being stories on the Euro. I was actually in a check out line in the store and saw two average Americans wondering what the possible demise of the Euro would mean to them, even as they tried to figure out exactly what the Euro is.

From the beginning many doubted whether the Euro made sense.  Essentially two large economic powers (Germany and France) keeping the rest of a continent afloat and monetarily stable through a new currency.  It seemed evident to many, like the United Kingdom which has never participated in this currency, that this was a formula for disaster and that some weaker economies could easily become a leach to those that are more productive.  At this point, Germany is essentially seen as the continent’s ATM and they are growing very tired of that position.

Germany and France are still declaring there is “no way” they will allow the Euro to fade, but many in the financial industry question the currency and have concern about the European Union itself.  Here is an insightful article from The Economist Magazine: 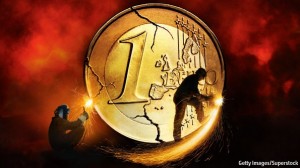 Can the Euro actually be saved?

SO GRAVE, so menacing, so unstoppable has the euro crisis become that even rescue talk only fuels ever-rising panic. Investors have sniffed out that Europe’s leaders seem unwilling ever to do enough. Yet unless politicians act fast to persuade the world that their desire to preserve the euro is greater than the markets’ ability to bet against it, the single currency faces ruin. As credit lines gum up and outsiders plead for action, it is not just the euro that is at risk, but the future of the European Union and the health of the world economy.

It is a sobering thought that so much depends on the leadership of squabbling European politicians who still consistently underestimate what confronts them (see article). But the only way to stop the downward spiral now is an act of supreme collective will by euro-zone governments to erect a barrage of financial measures to stave off the crisis and put the governance of the euro on a sounder footing.

The costs will be large. Few people, least of all this newspaper, want either vast intervention in financial markets or a big shift of national sovereignty to Europe. Nor do many welcome a bigger divide between the 17 countries of the euro zone and the EU’s remaining ten. It is just that the alternatives are far worse. That is the blunt truth that Germany’s Angela Merkel, in particular, urgently needs to explain to her people.

The failure of austerity and pretence

A rescue must do four things fast. First, it must make clear which of Europe’s governments are deemed illiquid and which are insolvent, giving unlimited backing to the solvent governments but restructuring the debt of those that can never repay it. Second, it has to shore up Europe’s banks to ensure they can withstand a sovereign default. Third, it needs to shift the euro zone’s macroeconomic policy from its obsession with budget-cutting towards an agenda for growth. And finally, it must start the process of designing a new system to stop such a mess ever being created again.

The fourth part will take a long time to complete: it will involve new treaties and approval by parliaments and voters. The others need to be decided on speedily (say over a weekend, when the markets are shut) with the clear aim that European governments and the European Central Bank (ECB) act together to end…(read more)