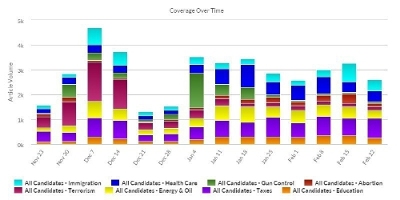 Does breaking news elect the  president?

In a presidential election year, it’s inevitable that big stories will have an impact on trending candidate talking points: think natural disasters, political standoffs in Congress, oil prices. When news breaks, candidates respond. Reporters also take the initiative to compare candidates’ positions during breaking news events. These observations lead one to wonder: When it comes to trending topics, does reaction to mainstream media determine campaign talking points, or do the candidates and their defining Platforms  prevail?

Four of the top eight campaign issues are relatively similar during the last three months of the campaign. Health care, energy & oil, and taxes dominate the political arena, covered in broadcast, print, online news, and talked about in social media, forums and comments on news articles. Immigration shows up fourth in the list of most-covered  issues.

To sort out what peaks relate to breaking news, let’s see what has affected these  trends.

These things considered, do other trends emerge in the last hundred days? Breaking this data down into the separate parties can help us see  more:

And aside from the recent bump in immigration coverage, it does appear as though candidates spoke equally about those top 8 topics between February 8th and February 15th, a week when no debates were held (which are newsworthy events indeed). As the tight race progresses through primaries and caucuses, candidates may be looking for more ways to set themselves apart from the competition, and focusing on these lesser-covered issues gives undecided voters the chance to see minute differences that could guide their decisions on Election  Day.

What’s your take? Is all of this evidence that the candidates control their media coverage and the topics they find most important? Or does this data show that candidates are simply in reactive mode as they try to fight for their party’s respective  nominations?

Tweet us at @LexisNexisBiz and let us know. Find more insights on the intersection of media and the presidential election on the LexisNexis Biz  Blog.