In freedom lies the risk of failure. But in statism lies the certainty of stagnation.

This column appeared in the Wall Street Journal December 19, 2011

Congressman Paul Ryan recently coined a smart phrase to describe the core concept of economic freedom: “The right to rise.”

That is what economic freedom looks like. Freedom to succeed as well as to fail, freedom to do something or nothing. People understand this. Freedom of speech, for example, means that we put up with a lot of verbal and visual garbage in order to make sure that individuals have the right to say what needs to be said, even when it is inconvenient or unpopular. We forgive the sacrifices of free speech because we value its blessings.

But when it comes to economic freedom, we are less forgiving of the cycles of growth and loss, of trial and error, and of failure and success that are part of the realities of the marketplace and life itself.

Increasingly, we have let our elected officials abridge our own economic freedoms through the annual passage of thousands of laws and their associated regulations. We see human tragedy and we demand a regulation to prevent it. We see a criminal fraud and we demand more laws. We see an industry dying and we demand it be saved. Each time, we demand “Do something . . . anything.” 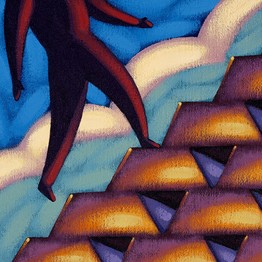 As Florida’s governor for eight years, I was asked to “do something” almost every day. Many times I resisted through vetoes but many times I succumbed. And I wasn’t alone. Mayors, county chairs, governors and presidents never think their laws will harm the free market. But cumulatively, they do, and we have now imperiled the right to rise.

Woe to the elected leader who fails to deliver a multipoint plan for economic success, driven by specific government action. “Trust in the dynamism of the market” is not a phrase in today’s political lexicon.

Have we lost faith in the free-market system of entrepreneurial capitalism? Are we no longer willing to place our trust in the creative chaos unleashed by millions of people pursuing their own best economic interests?

The right to rise does not require a libertarian utopia to exist. Rather, it requires fewer, simpler and more outcome-oriented rules. Rules for which an honest cost-benefit analysis is done before their imposition. Rules that sunset so they can be eliminated or adjusted as conditions change. Rules that have disputes resolved faster and less expensively through arbitration than litigation.

In Washington, D.C., rules are going in the opposite direction. They are exploding in reach and complexity. They are created under a cloud of uncertainty, and years after their passage nobody really knows how they will work.

We either can go down the road we are on, a road where the individual is allowed to succeed only so much before being punished with ruinous taxation, where commerce ignores government action at its own peril, and where the state decides how a massive share of the economy’s resources should be spent.

Or we can return to the road we once knew and which has served us well: a road where individuals acting freely and with little restraint are able to pursue fortune and prosperity as they see fit, a road where the government’s role is not to shape the marketplace but to help prepare its citizens to prosper from it.

This column can be found on the Wall Street Journal website.