By Carey Falter, Special for US Daily Review. 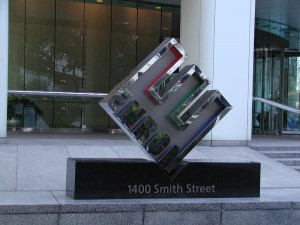 This is the time of year when everyone should be wrapping presents and singing carols, instead many are standing in the unemployment line. Ten years ago on December 3, 2001, the dreaded news was delivered to 4,000 employees working in Enron’s headquarters in downtown Houston. Christmas was only a couple weeks away and many were depending on their paychecks for more than just presents.

Many found themselves having to make some tough choices for Christmas. Leoncio Flores, a manager at Enron shares his story, “We did not buy presents during Christmas because Enron collapsed and all of a sudden we do not want to put [up] the Christmas [decorations] anymore. The salary that I got at the end of November was supposed to buy some presents. It was hard to explain to my two daughters the economics of not buying a $20 present which we will use [instead] to buy groceries or pay for [rent] and utilities. The kids [knew] Santa is fictional but they loved the fact that gift-giving from Santa is seasonal fun, and they felt bad not to have lots of presents for the first time.”

Perrin Worrell, a recruiter in the Human Resources Department, remembers her family coming together to help her through the holidays, “I couldn’t afford to travel home, and I didn’t want my family to spend their money on coming to see me. . .but they wanted us to be together. So they made a family decision to split us up. My dad and one of my brothers came here, and my mom, my grandmother, and one of my other brothers stayed with my sister so there was family with her when she had her child.”

When the media refers to Enron, they mostly talk about the layoffs that occurred in Houston. Not many realize that Enron slashed jobs around the globe the few weeks prior and after it declared bankruptcy. In Portland, Oregon, Yuichi Suda, a Director with Enron Broadband Services, was laid off in mid-November.

Christmas was only a few weeks away when the Suda family realized their dire financial situation. Their children sensed the tension and through their innocent words reminded them how truly blessed they really were. Yuichi’s wife, Gail remembers, “Our younger son, Kevin, age 13, said, ‘Mom, what would you like for Christmas?’ Realizing we weren’t going to have any money to spend on presents this year, I said, ‘The best thing you can give me is something you write.’ To this day, his poem entitled ‘A Mother’s Love,’ and his brother Ryan’s ‘Dear Mom’ poems are the two most precious gifts I have ever received from anyone.”

Colin Bailey was a Purchasing Manager for Enron Europe in London, England. He had been working for Enron about a year when he lost his job the week before the bankruptcy. “I walked out and I am like, ‘Oh, what am I going to do? I’ve got Christmas, I’ve got a child’. . .It was a very horrible feeling.”

It was almost more than Bailey could bear. The $20,000 he had invested in Enron was gone. He had thought he was making the best decision for his family; now they were worse off than before. “It’s like, ‘I’ve got nothing.  I’ve lost all my savings. I thought I was doing the right thing with something that looked incredible, and I’ve lost it all’. . .I couldn’t pay December’s mortgage because all my savings was gone. What do I do? We have to put payments off. It was like the world has fallen out beneath you.”

He went home and looked at his family and determined that as long as they were healthy, nothing else mattered. “But with what we had been through the year before, we were like, it was only money, it is material. . .It put it in perspective for me. Being through what we’ve been through with my daughter, [how she] was on life support with septicemia a year before, it was like, ‘Well, come on, there are a lot more important things. It’s a job, it’s money; there are jobs out there. We will get something.’”

Christmas holds special meaning for each one of these people having gone through the trauma of losing their jobs near that time. Sadly it seems companies are handing out more pink slips than the year before. The mere 4,000 employees laid off from Enron on December 3, pales in comparison to other more significant layoffs since then. In the minds of these four individuals, it will live with them forever.

Carey Falter is the author of Rising Above Enron: An Inside Look at the Collapse and How Twelve People Used it to Transform Their Lives. She is a graduate of the University of Arizona’s Eller College of Business and a freelance business book summary writer for EBSCO Publishing. For more information visit, http://raenron.com.