By ClimateDepot.com, Special for US Daily Review. 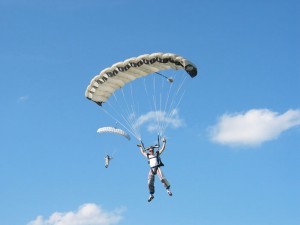 Today, CFACT skydivers will parachute past COP17 trailing banners demanding attention to the Climategate 2.0 emails.  The skydiving team will land at Toti beach.  Media and all interested persons are invited to the beach to observe the landing.

The second batch of emails from scientists working on the UN’s Intergovernmental Panel on Climate Change contain shocking revelations which show an insular cadre of climate scientists coordinating efforts to place advocacy ahead of science, stifle dissent, and conceal information which detracts from a preconceived, ideologically driven, global warming narrative.

“Media covering COP17 are kidding themselves if they think they can ignore and wish away Climategate 2.0,” said CFACT Executive Director Craig Rucker.  “Lord Monckton, the folks from Climate Depot and I will carry our message by parachute if that’s what it takes to wake up this conference and place the Climategate evidence of corrupted science where the world must see it.”

The Climategate emails provide a shockingly candid look at the machinations of the high priests of global warming.  They have given rise to renewed demands that the IPCC, EU and the EPA cancel existing plans and programs to cap and tax carbon emissions.  These misguided policies already have created economic havoc in Europe, cost hundreds of thousands of jobs in the U.S. and pose a major threat to the world economy.

Marc Morano, publisher of CFACT’s ClimateDepot.com, said that the emails reveal the scientists at the heart of the manmade global warming industry have been “caught red-handed exaggerating the extent of man-made global warming while privately admitting to one another that the evidence is nowhere near as strong as they were claiming.”

The new emails led Morano to conclude that they “Further expose the upper echelon of the UN IPCC as being more interested in crafting a careful narrative than following the evidence.”  He notes, for example, that Penn State professor Michael Mannstated in one email that, “The important thing is to make sure they’re [climate skeptics] losing the PR battle.”  The University of East Anglia’s Keith Briffa (a colleague of the already discredited EAU Climate Research Center head Phil Jones) also chimed in, “I find myself in the strange position of being very skeptical of the quality of all present reconstructions, yet sounding like a pro greenhouse zealot here!”

Rucker further noted that “The release of these emails is yet another major setback for alarmists who are hyping fears over climate change in order to exercise influence over ever-increasing segments of the U.S. and world economy.”

CFACT, which has been a fully accredited non-governmental organization at these UN events for two decades, will be closely monitoring and offering daily reports on the developments in Durban.  Rucker says the new emails provide even stronger reasons to oppose such radical Green initiatives as the World Wildlife Fund-Oxfam proposal for a new $25 per ton global tax on shipping with the goal of curtailing carbon emissions; the call by Bolivia, Cuba, Dominica, Ecuador, Nicaragua, and Venezuelafor a new climate tax on worldwide financial transactions; and a proposed new “sustainability treaty.”

As Rucker notes, “The real agenda of the climate alarmists is to promote massively expanded government regulation worldwide, at the expense of jobs creation and economic growth.  The policies they advocate will do the greatest harm to the world’s poorest people and ensure that citizens of developing nations have no chance at true freedom and prosperity.”

Gandhi told us, “First they ignore you, then they laugh at you, then they fight you, then you win.”  CFACT’s parachute drop will force the media to cease ignoring the evidence.  CFACT looks forward to winning.