By Candace E. Salima, Contributor of US Daily Review 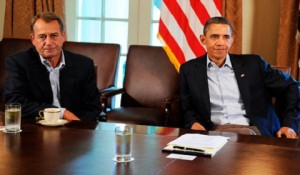 It was compromise that got America into the unholy economic and constitutional mess we’re in now. We must return to those principles which made America great. If we do not, if we continue to compromise toward socialism we will be destroyed, and there will be no sign of that America left which was once an ensign to the nations of freedom, liberty, and love of life.

I know that seems a very harsh statement, but it is a stark fact of life which seems to escape all politicians. Compromise in Washington, D.C. seems to be Republicans giving in and giving in until there is no longer a resemblance to the conservative values they once held. We simply cannot main this course, it is unsustainable on many levels.

We’ve done nothing but compromise, or improve, the U.S. Constitution since its creation. The Bill of Rights was one such improvement which was good. The 13th Amendment abolished slavery, which was an abhorrent practice, therefore another good improvement. The 19th Amendment gave women equal rights under the law, yet another improvement. The 16th and 17th Amendments are unmitigated disasters. The 16th allowed Congress to collect taxes directly from the people, rather than from the states. This allowed for double taxation, first the state to whom we were already paying taxes, and now an added tax to the federal government.

Then, the U.S. Supreme Court (SCOTUS) decided that a farmer couldn’t grow all the wheat he wanted, even though it was for his own consumption (Wicker vs. Filburn,) and the Constitution as we knew it was forever altered in the way it was administered. The “commerce clause” has been used from that day forward as a club over the heads of the American people and the individual states.

Fast forward to Franklin Delano Roosevelt, and we compromised a little more—well, actually a lot more—when he implemented his “New Deal” and plunged our nation deeper into a depression while trampling all over states’ rights and the individual constitutional rights of the American people. And this is the inspiration for our current president, Barack Obama, who is calling for us to compromise some more or as he so eloquently disguises “share sacrifice.”

Our current government has little resemblance to the one the Founding Fathers set up. They envisioned a small federal government with enumerated powers (Article One, Section Eight) and the states set up with unlimited powers, except those given to the federal government, as laboratories. In other words, the states are supposed to handle everything in relation to their citizens, because they shop, go to church, work, and our children go to school with the children of those who represent us legislatively. If it doesn’t work at the state level, and sometimes it doesn’t, then we regroup and find something else. That is a workable system.

We can’t compromise on unsustainable debt, overreaching federal government agencies, energy independence, healthcare, the Bill of Rights, States rights or any of our other constitutional rights. These are off the table. So stop compromising and get your jobs done. We cannot compromise on what made America great, so stop asking us to do so.

Candace E. Salima is a syndicated talk show host, author, and columnist.  Learn more about her at www.CandaceSalima.com.