Stories of crony capitalism and the propping up of businesses that cannot make it in the market place have become common during the Obama Administration. In particular is the Administration’s obsession with alternative fuels while the larger economy needs affordable energy today.

The American Fuel & Petrochemical Manufacturers (AFPM) President Charles T. Drevna responded today to reports that the Pentagon is moving forward with a plan to spend nearly half a billion dollars to help build biorefineries. Drevna notes such policies are another example of the government picking winners and losers in the marketplace instead of taking steps to enhance America’s energy security: 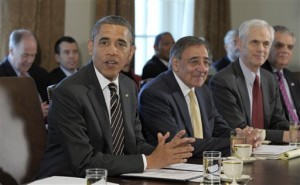 Obama and Panetta are Putting Politics Above Security

“Paying $26 per gallon for fuel when the Navy could be spending around $3.50 per gallon does not enhance energy security,” said Drevna. “The proposal to spend almost half a billion dollars to help build biorefineries that will produce extremely expensive fuel is just the latest example of this administration’s anti-fossil fuel agenda. Such ill-crafted policies come at the expense of taxpayers and, in case in particular, our energy security.”

“This initiative is another Obama administration green fuel gimmick to make headlines, but it does nothing to address national security. If the administration truly wants to enhance U.S. energy security, it would unleash more of our domestic oil resources and take steps to ensure a regulatory environment that allows American refiners to stay open and competitive in the global marketplace. Unfortunately, this latest announcement is another example of the administration’s all-of-the-above-but-none-of-the-below energy policy. At a time when tensions continue to rise in the Middle East, this moves our country down a potentially dangerous and unsecure path.”

According to a statement, AFPM, “the American Fuel & Petrochemical Manufacturers (formerly known as NPRA, the National Petrochemical & Refiners Association) is a trade association representing high-tech American manufacturers of virtually the entire U.S. supply of gasoline, diesel, jet fuel, other fuels and home heating oil, as well as the petrochemicals used.”