If passed, the Studying Towards Adjusted Residency Status (STARS) Act, introduced yesterday by Rep. David Rivera (R-Fla.), would be only the first in a series of amnesties for illegal aliens, charges the Federation for American Immigration Reform (FAIR). FAIR has consistently maintained that enacting any type of amnesty legislation will encourage rampant illegal immigration and create mounting pressure for additional amnesties. 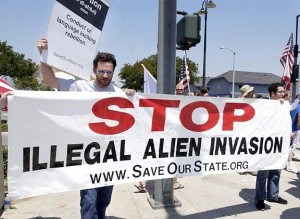 The STARS Act, the latest version of the DREAM Act, grants amnesty to illegal aliens if they meet certain residency requirements and graduate from college. But just like previous versions of the DREAM Act, the STARS Act is part of the relentless effort to gain amnesty for the entire illegal alien population. Amnesty advocates understand that broad legalization schemes are unpopular with the American public and that their goals will have to be achieved incrementally.  And through the passage of the STARS Act, Congress would not only grant amnesty to illegal aliens who meet the requirements of the bill, but would also secure the admission of millions of family members – either living in the U.S. illegally or living outside the U.S. – through chain migration.

“The American people have categorically rejected the notion of granting amnesty to people who violate our immigration laws. Americans know that doing so is both unfair and irresponsible,” said Dan Stein, president of FAIR.

“Once Congress rewards illegal aliens for bringing minor children to the United States illegally, more aliens will enter the country illegally with their children – or worse yet, send them on their own. Thus, passage of the STARS Act would not be the end of the amnesty process, but the beginning of a process for amnesty advocates to achieve the comprehensive amnesty they have sought piece by piece,” Stein warned.

In a statement on the floor of the House of Representatives, Congressman Rivera justified his STARS Act legislation by asserting, “Many young immigrants have found themselves stuck in limbo due to our failure to address immigration reform.”

“That assertion is patently false and offensive to the American public,” Stein responded. “Illegal alien parents who brought their children here illegally are at fault, not the American public, nor our policies. Our immigration laws need to be enforced, not reformed in a way that accommodates and rewards the lawbreaking.”

“The problem of mass illegal immigration cannot be dealt with by rewarding people who break our laws with amnesty, either piecemeal or comprehensively. The only effective approach is a wholesale reform of our immigration system, one that discourages people from coming or remaining in the U.S. illegally by removing all incentives or rewards for breaking the law. The STARS Act is yet another reward for illegal behavior that will create a new incentive for more people to break our laws,” concluded Stein.